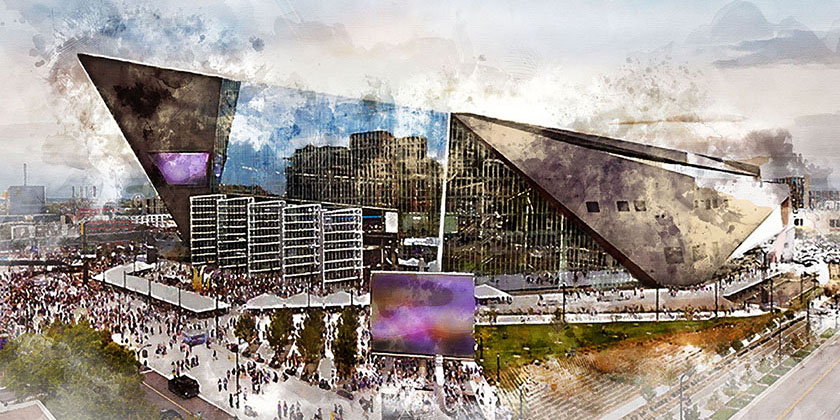 US Bank Stadium is a state-of-the-art covered stadium and home to the Minnesota Vikings. It was built in 2016 and was the site of Super Bowl LII. The uniquely designed stadium has quickly become an iconic part of the city’s skyline.

The following information should provide some details and inside information gathered from event goers and online reviews. It is intended to be a useful reference and will hopefully enhance your event experience.

Exit at 9B and follow signs for N 6th St.

Take Hennepin Ave north all the way into downtown.

Use the right two lanes to exit towards 11 St.

Stay left at the fork towards 11 St.

Keep left at the fork towards 11 St.

Other Ways to Get to U.S. Bank Stadium

You can hop on the Blue or Green Line to get directly to U.S. Bank Stadium Station. The lines come from Minneapolis, St. Paul, and Bloomington. On game days, trains come frequently but still be prepared to wait. Find out more information and tips on MetroTransit’s U.S. Bank Stadium page.

Finding affordable parking at U.S. Bank Stadium is available. As with most venue parking, the further away that you park, the less that you’ll pay. At least that’s what Captain Obvious tells us.

You can save as much as $20 if you’re willing to walk a few extra blocks.

Book a space ahead of time so that you know exactly where you’re going to park, how much you’ll pay, that space will be waiting for you on the other end of your journey. This is the easiest way to make sure that things go smoothly on game day and remove the potential stress from your U.S. Bank Stadium parking experience.

Taking The Train To U.S. Bank Stadium - Consider The All Day Pass

For one price, you get unlimited rides on local buses, the A Line or METRO lines from the time of purchase through 2 a.m. the next day. It's enough time to take in a game, a concert or another event. Even if there's an extra encore or overtime, you're covered! When you're ready to go home, there's no need to wait in line to buy a return ticket – just hop on!

Remember to keep your pass with you: you'll need to put it in the farebox on any bus you ride or show it to Transit Police officers on trains as proof of payment if asked.

It has been reported that wait times for security checks at the entrance gates can exceed 30 min. If you are attending in extremely cold weather, make sure you dress extra warm with loose layers.

Keep in mind, however, that not every game or event will have the same wait times and since this is a newer stadium, logistics will improve over time.

US Bank Stadium is rapidly gaining a reputation for having some of the best seats of any stadium, with good sight lines and few, if any, obstructed views. Many have reported that there isn’t a bad seat in the house.

The one issue that has been reported is that the seating can be a little tight for larger individuals.

Also, the seat cup holders are at ground level to save space, just be mindful not to trip over them as you get to your seat.

As with many stadium concessions, prices tend to be on the high side so make sure you bring enough cash. A bottle of water costs $5.50. Expect to pay around $10 for a 16 oz. beer and as much as $13. A double burger and tater tots will run you about $17.

Some event-goers have reported fairly long lines at the restrooms. Some feel that the number of available restrooms is small compared to other venues. Plan your restroom visits accordingly.

Much like Mercedes-Benz Stadium, concert goers to US Bank Stadium have reported issues with acoustics.

Tailgating is permitted at U.S. Bank Stadium and begins at 7 a.m. for 12 p.m. games. For all other games, tailgating can begin 6 hours before the game. Tailgating must finish 4 hours after the game or by 12 a.m.

Parking Lot staff will direct you to appropriate tailgating lots, as travel aisles must not be blocked.

10 Closest Hotels Near US Bank Stadium

Check out the schedule below to buy tickets to see a concert or event at U.S. Bank Stadium today!