UPDATE 10/2/2018: Due to "a change in plans," CupcakKe has said on Twitter today that she will not be able to support Iggy's "Bad Girls Tour." A replacement for her has yet to be announced. Stay tuned to Event Tickets Center for more updates!

Iggy Azalea is gearing up to hit the road for an all-new tour, bringing the hip-hop star to cities across North America this fall!

The 21-city “Bad Girls Tour” gets underway on October 27th with a show in Hollywood, FL. From there, the “Fancy” singer will hit the stage in cities like Washington DC, Boston, Chicago, Denver, and New York before wrapping up the month-long trek with a final performance in Houston on December 4th.

Iggy will be joined by opening acts CupcakKe and Megan Thee Stallion.

Who Is Iggy Azalea?

Inspired by artists like TLC, Missy Elliott, and Tupac, Iggy Azalea fled her homeland Down Under at just 16 years old, heading straight for the birthplace of hip-hop - the United States. Moving from Miami, to Houston, to Atlanta, the young artist picked up on the Southern-style drawl of her surroundings, which had a major influence on her style and sound. In 2011 she hit the road once more, this time with LA in her sights. She released her debut full-length project, a mixtape titled Ignorant Art, that same year.

Following some label complications, Iggy fell back on her modeling roots for some time in 2012, landing a full-time gig as the “New Face of Levi’s Jeans.” Her musical stock skyrocketed later that same year after XXL Magazine featured her one the cover of their annual Top Ten Freshman issue alongside artists French Montana, Danny Brown, and Roscoe Dash. Iggy was the first female, non-American rapper to make the list, catching the attention of hip-hop fans across the world and several people within the industry.

Iggy went on to release her debut studio album The New Classic in 2014. The album peaked at the number three spot in Australasia and North America, spawning major hit singles “Fancy” and “Black Widow.” Since the album’s release, she has dropped several standalone singles and a six-song EP, as a series of delays have seemingly disrupted plans for the release of her sophomore album. Despite the odds, this rising star has proved time and time again that she will continue to create head-turning, chart-topping music, and we can’t wait to see what she’ll come up with next. 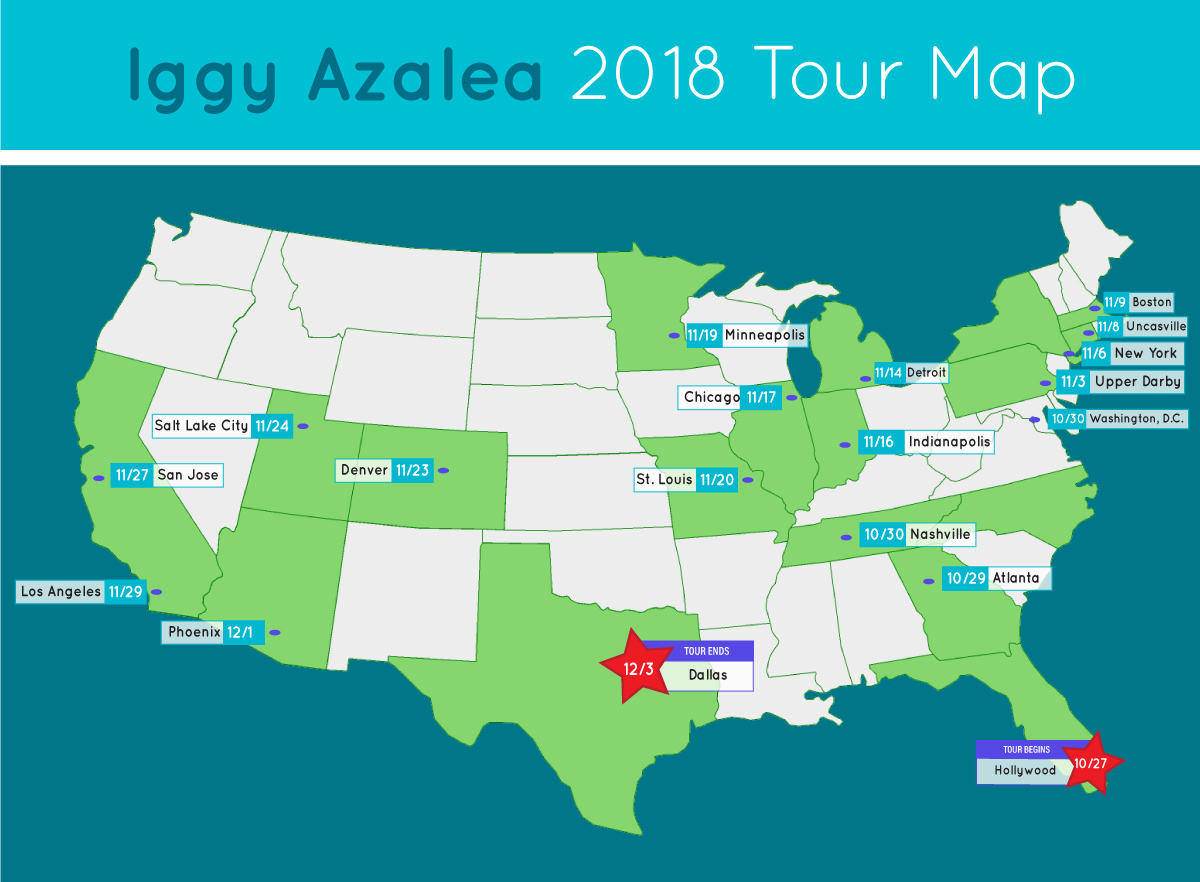 Where is Iggy Azalea playing near me?