Heavy metal legends Iron Maiden will be returning to stages across the US with their newly announced “Legacy of the Beast Tour,” kicking off in 2019!

“Legacy of the Beast” launches July 18 at the BB&T Center in Sunrise, FL before taking the guys to a slew of cities across the nation, many of which they will be visiting for the first time in decades. Stops will include Brooklyn, Boston, Hartford (first gig since 2005), Indianapolis, Portland (first show since 1987!), and Oakland. A final show at San Antonio's AT&T Center will bring the curtain down on September 25.

The upcoming run of shows was inspired by Iron Maiden’s Legacy of the Beast mobile game, which features their mascot Eddie on a journey exploring various Maiden Worlds.

“This inspired us to put together a stage show to take our fans through different Worlds and experiences set to appropriate songs,” front man Bruce Dickinson shared in a statement. “It is not that easy designing different Worlds on stage and we put a huge amount of work into this to make it work and the end result we feel is our most spectacular and certainly the most complex show to date.”

“Legacy of the Beast” promises to be the band’s biggest production ever and will see the band performing songs they haven’t played live in several years.

“We’ve got all kinds of crazy things going on,” Dickinson continued. “Including a replica Spitfire plane dominating the stage during ‘Aces High,’ tons of pyro, a giant Icarus, muskets, claymores and some truly marvelous flame-throwers which I have a hell of a lot of fun with, as you will see! And of course, we have Eddie, as you’ve never seen him before, and absolutely loads of other surprises. I’ve had the time of my life playing with all these magnificent props on stage, it’s been fantastic, we can’t wait to bring this show to you!”

Who Is Iron Maiden?

Known as the pioneers of British heavy metal, Iron Maiden rose to fame with their melodic guitars, powerhouse vocals, and ambitious writing, setting the rock scene for the 1980s. Their many successes have cemented their status as one of heavy metal’s most influential, enduring, and distinctive bands, inspiring generations of later acts including Metallica, Dream Theater, Avenged Sevenfold, Slipknot, and In Flames. Despite lack of radio play or mainstream attention, they have remained extremely popular throughout the music scene over the course of their 40+ year career.

Iron Maiden has cited acts such as Black Sabbath, Deep Purple, Led Zeppelin, and Pink Floyd as influences on their style and sound. Their musical style has remained consistent over the course of their career, although recently they have started incorporating progressive elements into their songs. Their music catalog has grown to 38 albums, including 16 studio albums, 12 live albums, seven compilations, and four EPS.

Iron Maiden is considered one of the most successful heavy metal bands in history, selling over 100 million albums worldwide and performing in over 2000 live shows around the globe. For over 35 years, they have been represented by their famous mascot Eddie, who has appeared on almost all of their album/singles covers, in their live shows, and is even the namesake of their private Boeing 747, aptly dubbed Ed Force One. 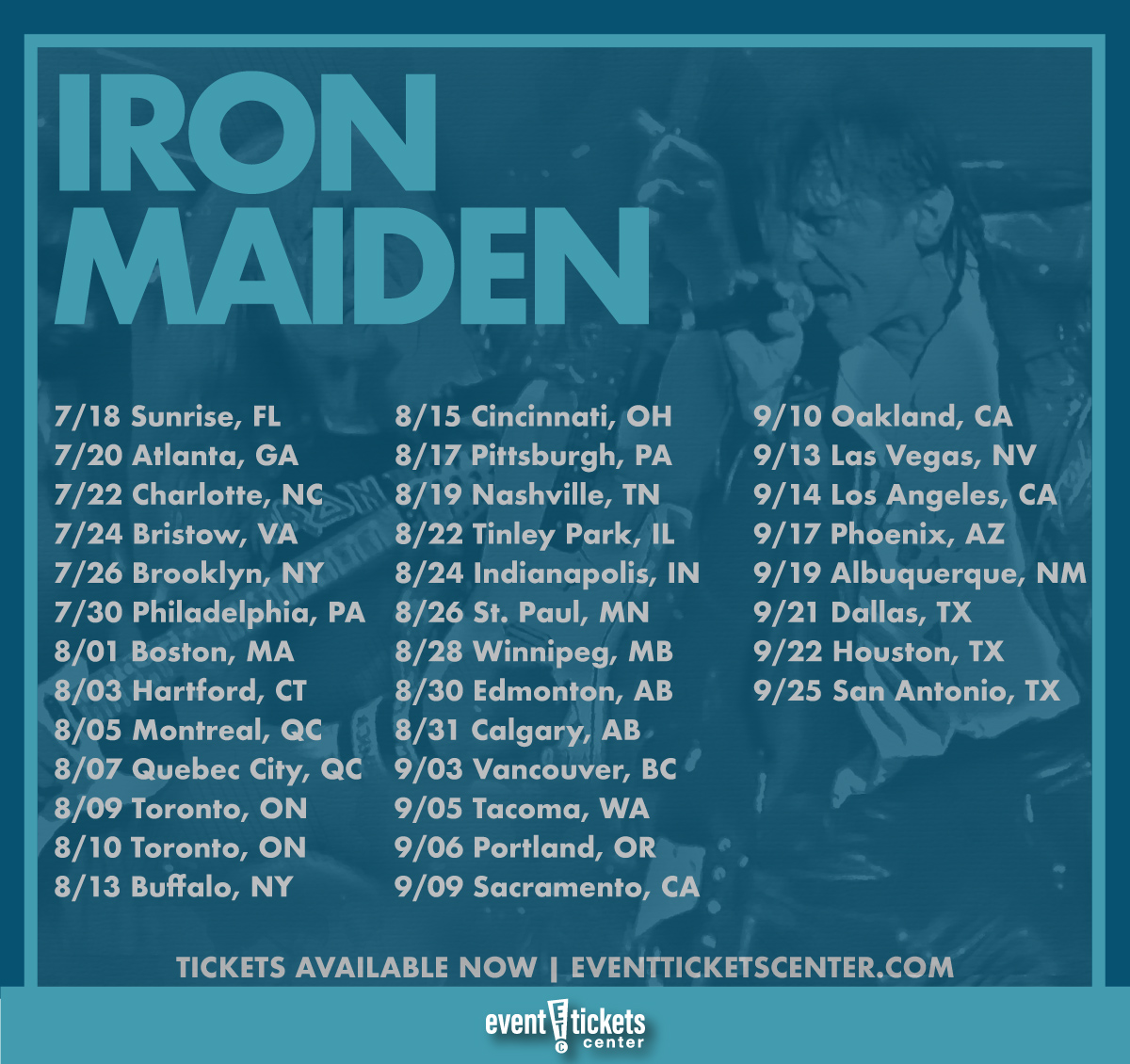 Where is Iron Maiden playing near me?