Gucci Mane has just announced a brand-new North American tour that will bring the rapper to a handful of cities across the US this fall!

Dubbed “The Unusual Suspects Tour,” Gucci Mane will hit the road with co-headliner Carnage in early November. The 12-date trek kicks off November 7 in St. Paul, MN before winding its way through the US to hit cities including Chicago, Washington DC, Brooklyn, Denver, and Salt Lake City. A final show on December 7 will wrap things up in San Francisco.

An additional date being billed as “Gucci Mane & Friends” is set to take place on December 27 in his hometown of Atlanta, GA, and will see the rapper hit the Fox Theatre stage alongside several special (undisclosed) guests.

Gucci Mane has been gearing up for the release of his 13th studio album Evil Genius. The album will feature previously unreleased singles “Wake Up in the Sky” featuring Bruno Mars and Kodak Black, “Solitaire” with Migos and Lil Yachty, and “Kept Back” featuring Lil Pump.

“I really just been compiling a bunch of songs, listening to beats,” Gucci Mane said of the upcoming album in a recent interview.

Evil Genius is expected to drop later this year.

Who Is Gucci Mane?

Considered a pioneer of the hip-hop subgenre of trap music, Atlanta native Gucci Mane kicked off his professional music career in 2001. He made his mainstream breakthrough in 2005 with the release of his first album Trap House, which debuted at the number one spot on the Billboard Heatseekers chart. Gucci Mane would go on to release several hit albums including Hard to Kill, The Appeal: Georgia’s Most Wanted, and The Return of Mr. Zone 6, collaborating with the likes of Nicki Minaj, Estelle, Wyclef, Waka Flocka Flame, and Birdman, continuously topping the charts. His legal issues would come to a head in 2013, however, with a prison sentence becoming a crucial turning point in his story.

During his two years of incarceration, Gucci Mane released nearly 30 mixtapes. By the time he was released in 2016, he emerged a respected genre icon and would go on to have a landmark year. His ninth studio album Everybody Looking arrived only months following his release from prison and debuted at number two on the Billboard 200, followed by his tenth album The Return of East Atlanta Santa a mere five months later. A collaboration with Rae Sremmurd on the massive hit track “Black Beatles” earned Gucci Mane his first number one single on the US Billboard Hot 100, rounding out an incredible breakthrough year for the artist.

2017 brought more continued success for the trap pioneer with the release of two more albums, Mr. Davis and El Gato: The Human Glacier, both of which debuted at the top of the charts. Gucci Mane shows no signs of slowing down, with plans to release his 13th studio album later this year. We’re sure he’s got plenty more up his sleeve for the coming new year, and we can’t wait to see what’s next for this iconic artist. 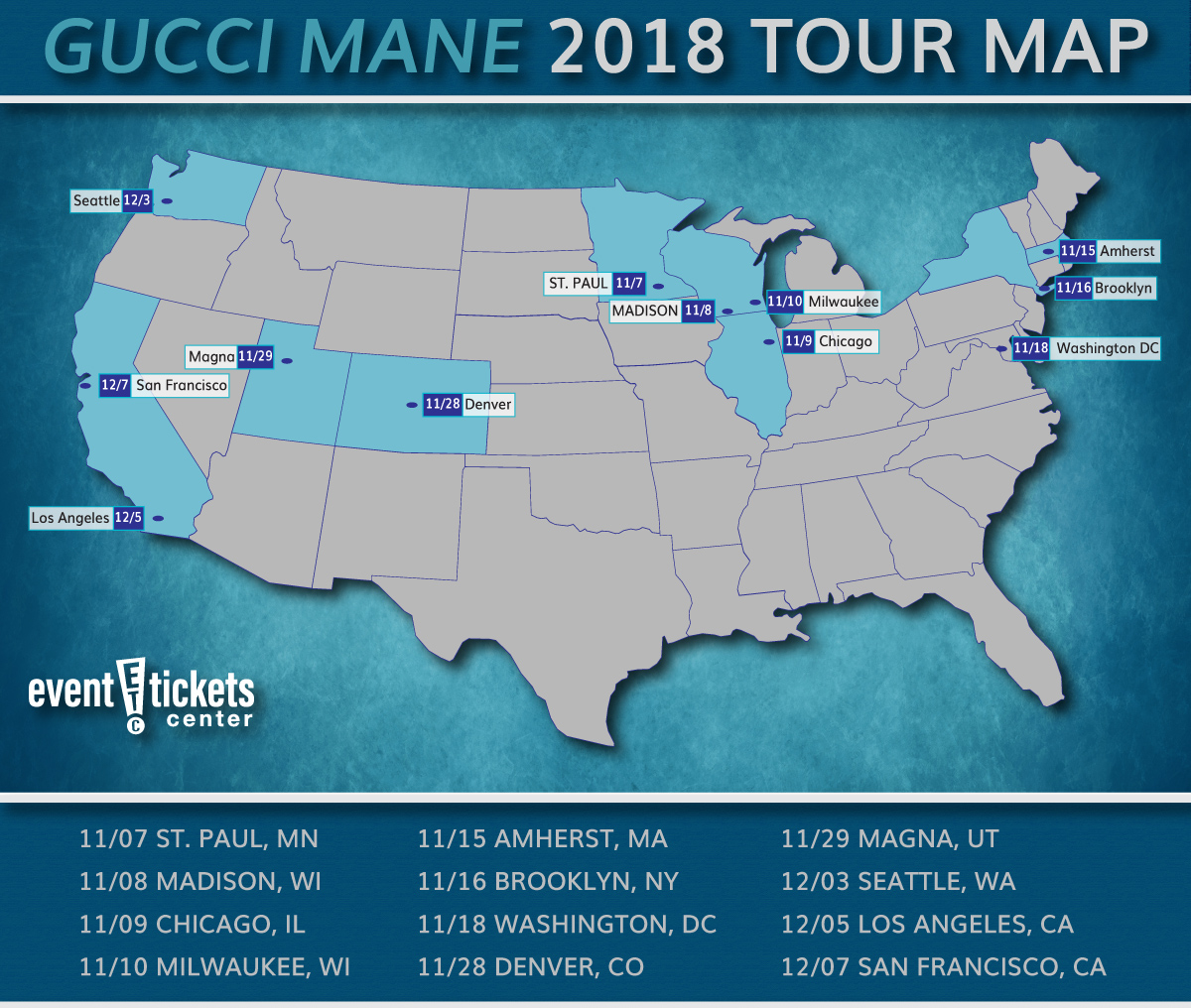 Where is Gucci Mane playing near me?