Rock marvels Greta Van Fleet are extending their “A Night Of Revelry Tour,” adding four more dates to the line-up this fall!

The rising stars show no signs of slowing, tacking on three additional US stops and one in London at the tail-end of their massive 2018 world tour. The “A Night of Revelry Tour” initially kicked off this past spring, taking the group to over 35 cities across the US and Europe.

Extended dates will include stops in New York City, Chicago, and a homecoming show at Detroit’s Fox Theater on December 27.

The news follows more excitement from the Michigan-based quartet, who just recently shared details on their highly-anticipated debut album, Anthem Of the Peaceful Army. The album comes after the band’s breakthrough success with a pair of 2017 EPs, spawning two number one hits with “Highway Tune” and “Safari Song.”

"I think there's some maturity on the album that you can hear, musically,” guitarist Jake Kiszka shared in an interview. “We were able to take our time and try new arrangements and new writing techniques. I think we've become a lot more savvy in the studio as well, so a lot of that will translate to the album. It's very energetic and aggressive."

Anthem Of the Peaceful Army is due for release on October 19.

Who Is Greta Van Fleet?

Greta Van Fleet have taken the rock world by storm since first stepping onto the scene as teenagers in the mid-2010s. The group, consisting of brothers Jake, Josh and Sam Kiszka, alongside friend and drummer Danny Wagner, was launched into stardom in 2017 after their single “Highway Tune” appeared in an episode of Showtime’s Shameless, driving it up the charts. The success of the single landed them spots in everything from The Tonight Show with Jimmy Fallon to a private performance at Elton John's Oscar Party. Their second EP, From the Fires, dropped later that same year, topping Billboard’s Hard Rock Albums chart and officially launching the quartet into global success. Greta Van Fleet’s sound has been compared to that of legendary rock group Led Zeppelin, most notably for Josh Kiszka's vocals that echo uncannily in the footsteps of Zep front man Robert Plant (with Plant himself citing the rising rockers as one of his favorite young bands). Although easily comparable to Plant and Zeppelin, Josh has stated that he drew on several of his favorite classic artists for influence, with the band citing The Who, Pete Townshend, Eric Clapton and Keith Richards as inspirations for their hard-hitting sound as well. 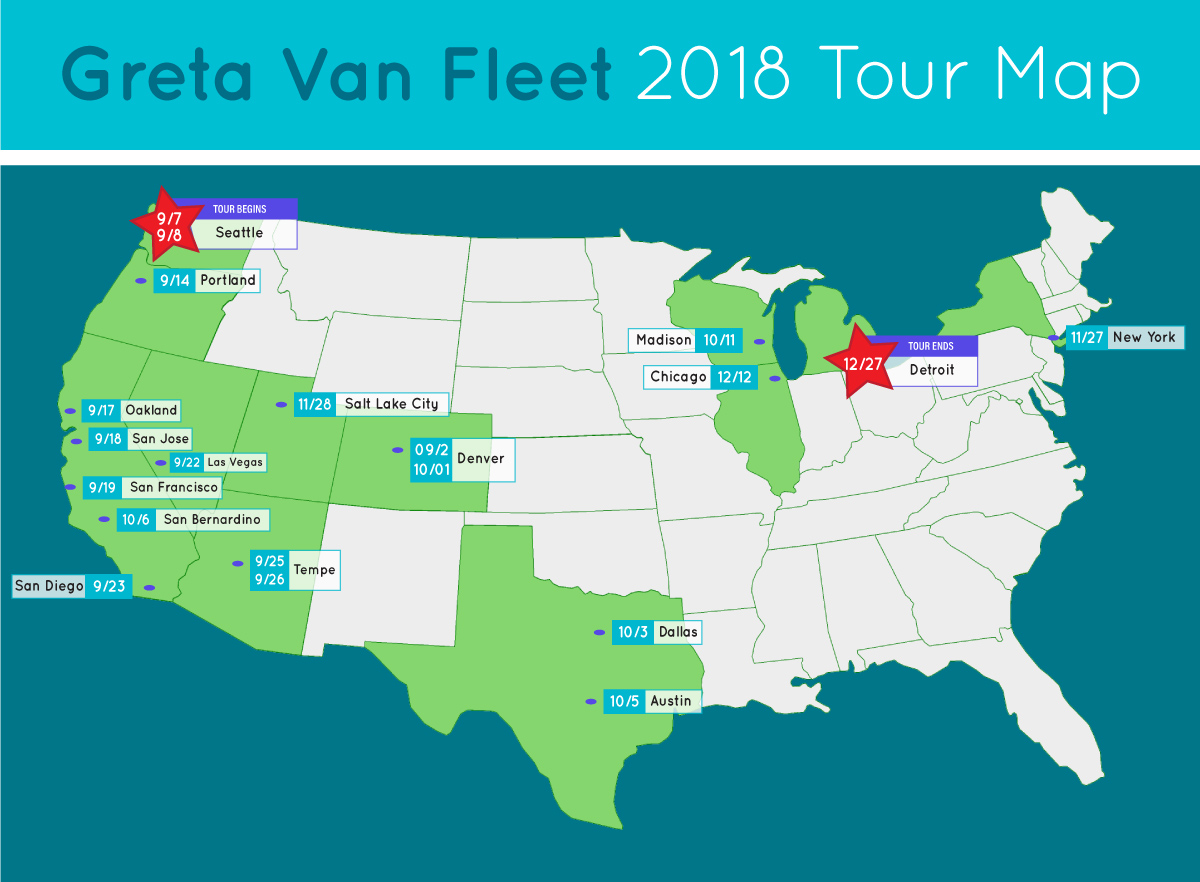 Where is Greta Van Fleet playing near me?