The metal rockers have shared they will be celebrating 20 years of music and hitting the road for an all-new headlining tour this winter!

The “20 Years of Bullshit Tour” will kick off November 12 with a show at the Metro in Chicago, IL. From there, the group will hit a slew of cities across the U.S. including Denver, Los Angeles, Dallas, Atlanta and Baltimore. A final performance at Pittsburgh’s Mr. Smalls Theatre will close out the 23-date run on December 12.

Every Time I Die will be joined by supporting acts and fellow metal rockers Turnstile, Angel Dust, and Vein. The anniversary tour will launch after the band wraps up a few dates with rock band Fall Out Boy in September on their M A N I A Tour.

Who Is Every Time I Die?

Every Time I Die (ETID) was formed by Buffalo, NY brothers Keith and Jordan Buckley in the winter of 1998. They were discovered during an initial short tour of shows that covered the Buffalo and Toronto, Canada area and went on to release their debut EP, Burial Plot Bidding War, in 2000. The band’s first full-length album, Last Night in Town, dropped in 2001 and lead to a tour with Killswitch Engage the following year.

ETID has made many appearances on tours and festivals including several stints with the Vans Warped Tour and a run with the heavy-metal music festival Ozzfest. Following a series of lineup changes over the years, ETID’s current lineup consists of Andy Willliams, Stephen Micciche, Clayton Holyoak and original members Keith and Jordan Buckley.

Although their genre has been described as heavy metal/hardcore punk, ETID’s style is strongly influenced by Southern rock. "The grit of Southern rock bands is the one commonality that the band has,” front man Keith Buckley stated. “It's something we all appreciate and grew up on, in a sense; mainly because it was the type of music that made a coarse poetry out of nature."

ETID has released a total of eight studio albums, including their latest project, 2016’s Low Teens. The album takes listeners on an emotional journey as the lyrics reflect the feelings experienced by Jordan Buckley following his wife’s complicated pregnancy and the emergency birth of his son. “There was nothing I could do; I was sitting there holding her hand,” he said in an interview. “It showed me new depths of what I am capable of feeling, especially after so many years of being in a band where you think you’ve dulled all of your edges by now.” Low Teens was named for the freezing temperatures that beat down on the Buffalo area during the time it was being recorded. 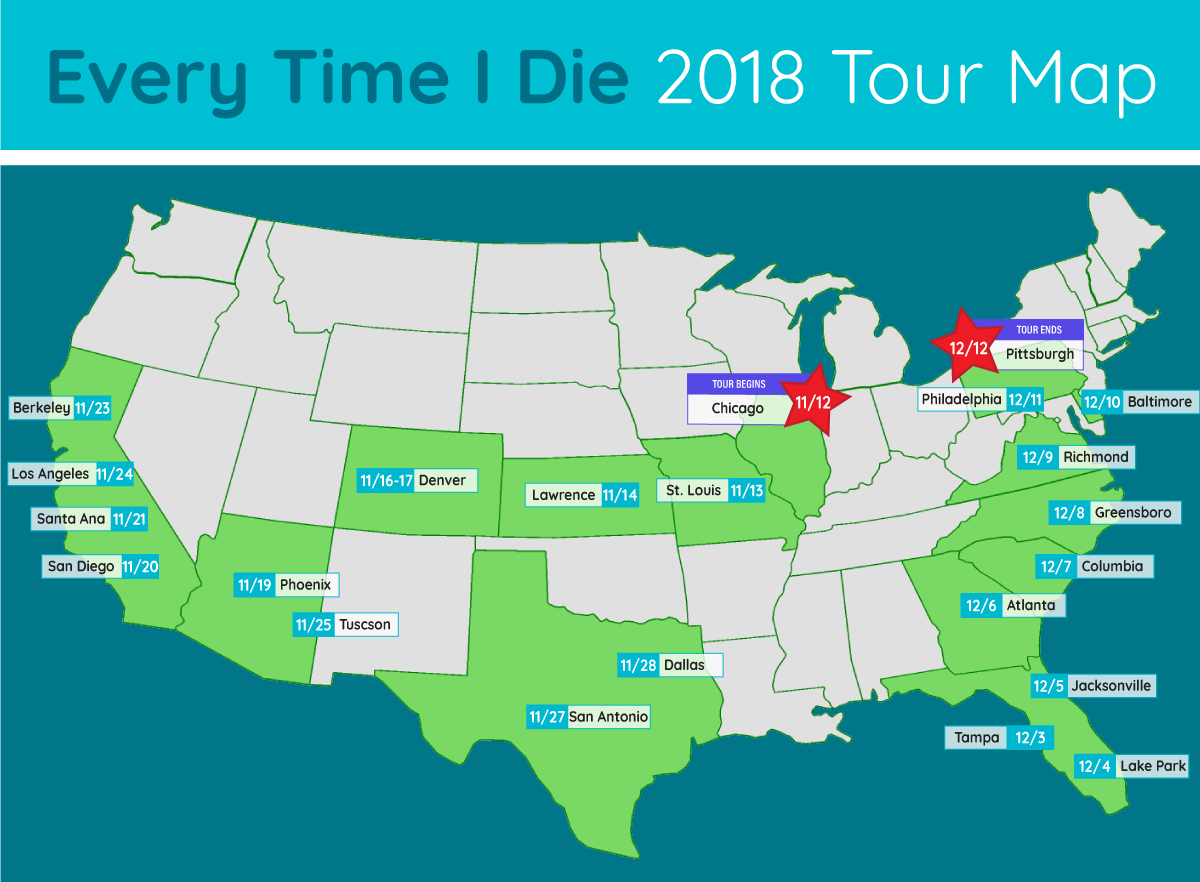 Where is Every Time I Die playing near me?