With a signature Celtic sound and careers that span over two decades, it’s hard to believe that punk rock bands Dropkick Murphys and Flogging Molly have yet to tour together. This summer, fans are in for a treat as the Irish rockers have announced they will be co-headlining in a 17-date trek across the United States.

The tour kicks off June 1st in Cleveland at the Jacobs Pavilion and includes stops in Minneapolis, Denver, and Pittsburgh. It concludes June 23rd in Gilford, New Hampshire, at the Bank of New Hampshire Pavilion at Meadowbrook.

The tour announcement comes as Dropkick Murphys wrap up their 2018 St. Patrick’s Day Tour, which included a sold-out hometown run of shows in Boston, now a yearly tradition. When the band was first conceived, they helped make a name for themselves with this series of shows that lasted through the week of St. Patrick’s Day.

Flogging Molly is in the homestretch of their Spring 2018 Life Is Good tour which saw over half of the dates sell out in advance. The tour included a St. Patrick’s Day celebration in Los Angeles at the Hollywood Palladium. The band is set to perform overseas in their 4th annual Salty Dog Cruise on April 20th, where they will set sail to the Bahamas.

Although this marks Dropkick Murphys and Flogging Molly’s first official tour, this isn’t the first time they’ve performed together. Dropkick Murphys’ sold-out European concert hall tour included February dates with Flogging Molly. This summer, fans across the U.S. will get a chance to witness the pair live.

Who are Dropkick Murphys?

Dropkick Murphys formed in 1996 in Quincy, Massachusetts and achieved mainstream success with their 2004 single and biggest hit to date, “Tessie.” In 2016, the band was awarded the “Robert F. Kennedy Children’s Action Corps’ Embracing the Legacy Award” for their years of charity work with children and military veteran organizations. Their most recent album, 11 Short Stories of Pain & Glory was released in 2017 to favorable reviews. Dropkick Murphys frequently cite rock band AC/DC as their main musical influence, with a Celtic twist.

Who are Flogging Molly?

Flogging Molly is a seven-member Celtic rock band that formed in 1997 in Los Angeles. The group is led by Irish vocalist Dave King, who was previously a member of the heavy metal band Fastway. They recently began making music again with the 2017 release of Life is Good, their first album in six years since 2011’s Speed of Darkness. As of 2006, Flogging Molly has sold over 1.5 million copies of records, with their 2009 album Drunken Lullabies becoming certified gold. 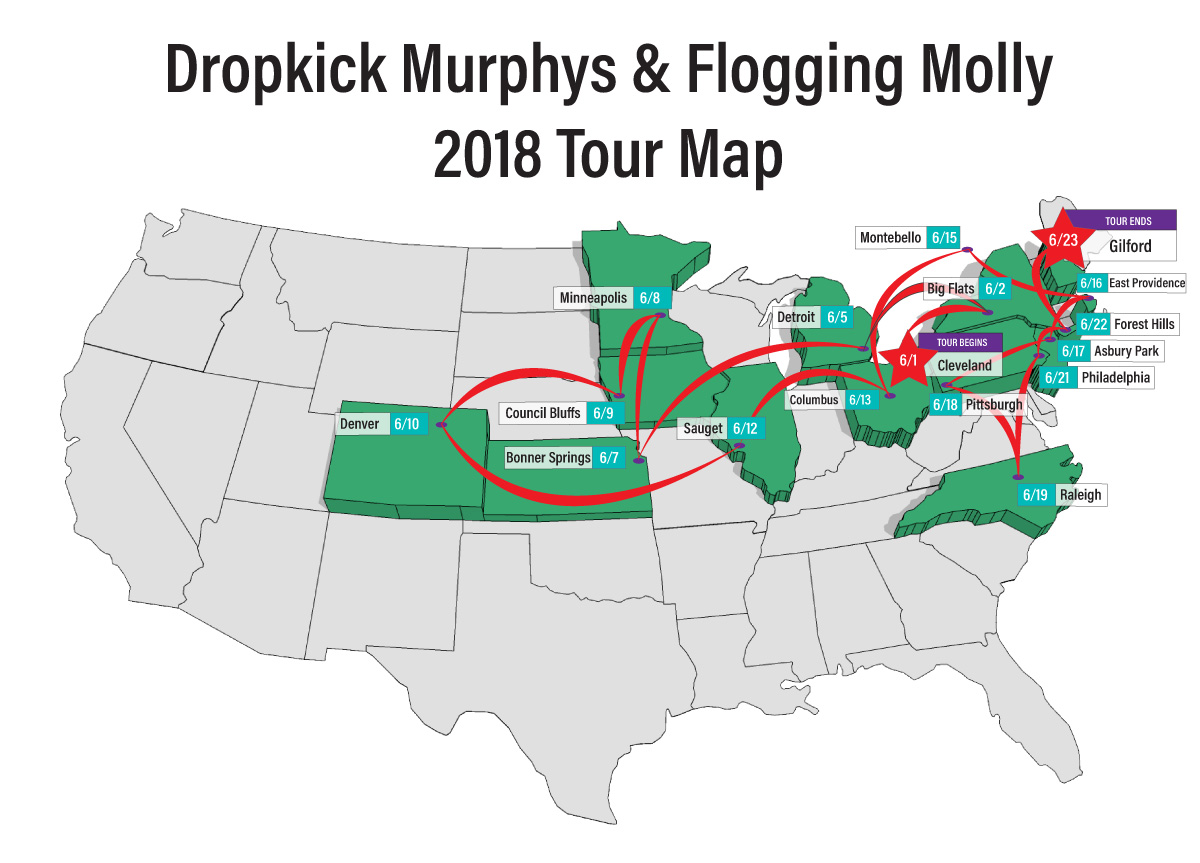 Where can I see Dropkick Murphys and Flogging Molly near me?