The Dirty Heads have recently shared news of their upcoming tour, set to bring the reggae/hip-hip group to a stage near you this fall!

The tour will kick off with a performance in Santa Cruz, California on September 21. The ‘Lay Me Down’ rockers will play a few more dates in the Golden State before venturing out to hit cities like San Antonio, Atlanta, Asheville, New Orleans and New York. A final show in Niagara Falls will close out the 22-date trek on October 24.

The Dirty Heads will be joined onstage by power-pop group Jukebox The Ghost beginning with their October 3 show in Tucson.

Who Are The Dirty Heads?

The Dirty Heads were formed in 2006 by frontman Jared “Dirty J” Watson and vocalist/guitarist Dustin “Duddy B” Bushnell in Huntington Beach, California. The area where they originated from was heavily influenced by reggae and ska music, shaping their musical style and sound. Watson and Bushnell first met at a party during their freshman year of high school.

After hearing one of Bushnell’s rap tapes, Watson became inspired to collaborate with him on a new project. Bushnell was already in a punk rock band at the time, while Watson had no previous music experience to work from. The duo began writing hip-hop songs with hints of reggae and punk influences in Bushnell’s garage.

Watson and Bushnell were later joined by a percussionist and bassist, and the band continued to write and record content. They were ultimately signed to a record label, releasing their debut studio album Any Port in a Storm in 2008, with a special edition of the album being released in 2010. The album featured famed musician Billy Preston playing the keyboard on multiple tracks, in what would be one of his final recoding sessions before his death. Any Port in a Storm produced the hit single “Lay Me Down,” which peaked at the number one spot on the Billboard Alternative Songs chart.

The Dirty Heads showed no signs of slowing down following the release of their debut album, going on to release several albums seemingly back-to-back. Cabin by the Sea, their second studio album was released in 2012 and contained the hit single “Spread Too Thin.” Their third album, Home – Phantoms of Summer was an 11-track acoustic album dropped in October 2013.

The Dirty Heads cite reggae band Sublime as a major influence on their musical style and sound. “We grew up listening to it,” said Watson. “We came from the [Long Beach] area and knew a lot of the same people, but we're obviously much younger. We met [Sublime's] Eric [Wilson) and Brad [Nowell] a long time ago. Lewis Richards has produced our stuff. It's almost the same camp. But we are thinking forward. We're not trying to sound like a '90s band. We're still progressive in our music, even though we do have a vintage sound sometimes.”

The band has cited rock band The Black Keys as an inspiration as well, playing on their warm and soulful style which also allows them to produce a more modern and relevant sound. 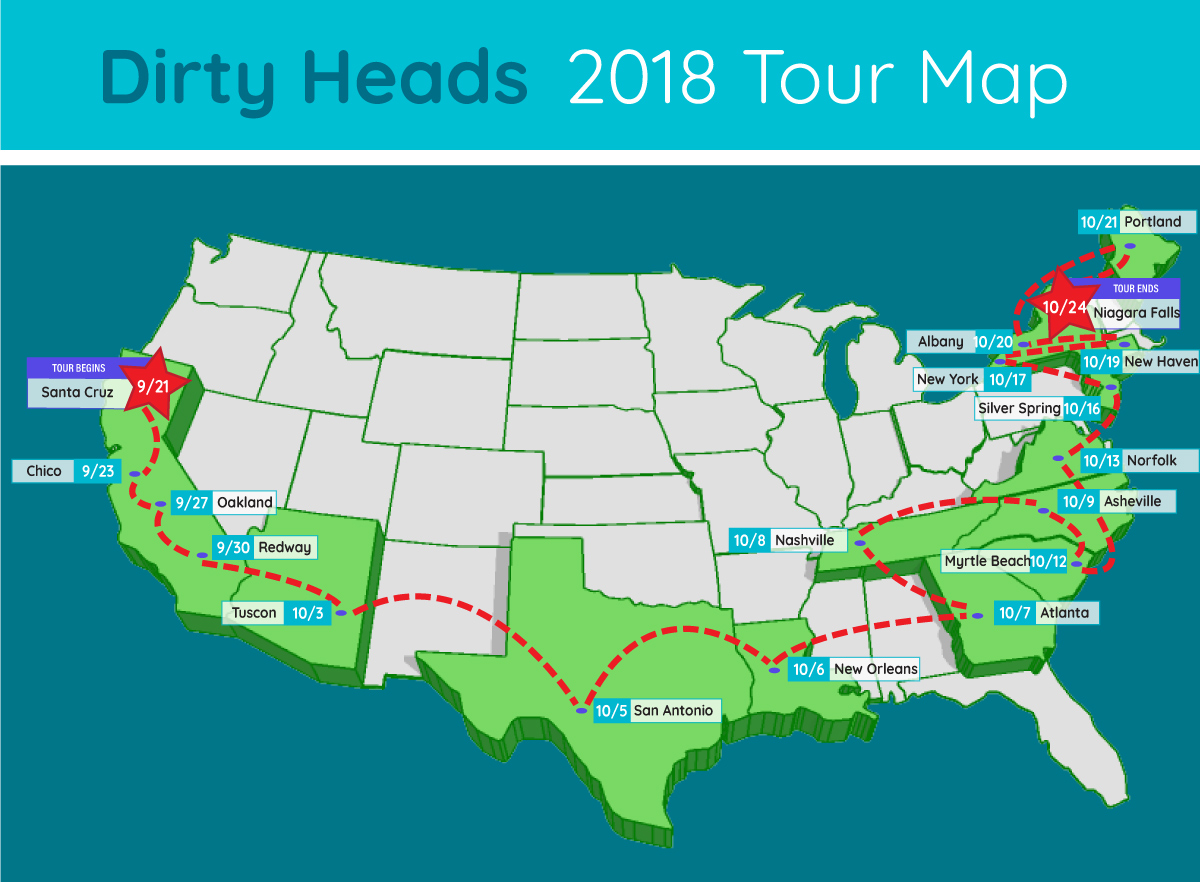 Where are The Dirty Heads playing near me?