The brainchild of Clark, the Dire Straits Legacy Tour will be hitting the road this fall 2018, bringing fresh music and popular classics to a select lucky cities. Kicking off in Los Angeles on September 26, the trek will then hit Riverside, St. Charles, Fort Lauderdale, and St. Petersburg. The band will close the tour on October 6 in Westbury.

The group’s first album hit shelves recently in 2017. Three Chord Trick, which Clark describes as “90% fun and 10% hard work,” features the musical talents of the band’s alumni, Tom Petty and the Heartbreakers drummer Steve Ferrone, as well as Marco Caviglia and Primiano Di Biase. Fans can expect to hear fresh singles like “Jesus Street,” “Epiphany,” and “Here and Now” at the group’s upcoming shows.

“This is a completely new, original project and if there is any resemblance to Dire Straits, it reflects the influence that I and Phil, Danny, Mel and Steve had on that band,” said Clark about the Legacy group’s first album.

Here’s what Dire Straits Legacy has to say on their upcoming tour:

“The DSL Dire Straits Legacy project was born from our love and respect for the music of Dire Straits, and to bring the music to fans who have been starved of hearing it played live by the musicians who made it, for far too long,” they said in a statement. “Now, after many requests, we're coming to the U.S.! Along with all the Dire Straits hits, we’ll also be playing one or two songs from our new album, and a couple of other tunes we’ve been involved with. See you there!”

For tickets and seating, check out the tour schedule right here at Event Tickets Center!

Who Are Dire Straits Legacy?

Clark joined Dire Straits as their chief keyboard player in 1980, initially on the road and then on the album Love Over Gold (1982) and onwards. He co-produced the band’s last studio release, On Every Street, with Mark Knopfler. (Knopfler, lead vocalist and guitarist for the original Dire Straits, is not a part of the Legacy lineup). Cummings played percussion with Straits in the early 1990s and went on to work on Knopfler’s solo albums. Collins, a member of King Crimson in their early days and again in their current reboot, played saxophone with Straits in the early 1980s, and Palmer did so as a member of the early 1990s touring lineup.

The Dire Straits formed in 1977 in London and had a successful 15-year career amid an ever-changing lineup that saw Knopfler and bassist John Illsley as its only original members. The group spent over 1,100 weeks on the UK albums chart, ranking fifth all-time. Their 1985 album Brothers in Arms is the eighth-best-selling album in U.K. chart history. They won four Grammy Awards, three Brit Awards (Best British Group twice), and two MTV Video Music Awards, among others. Mark Knopfler disbanded Dire Straits officially in 1995, subsequently choosing to focus on his solo career. 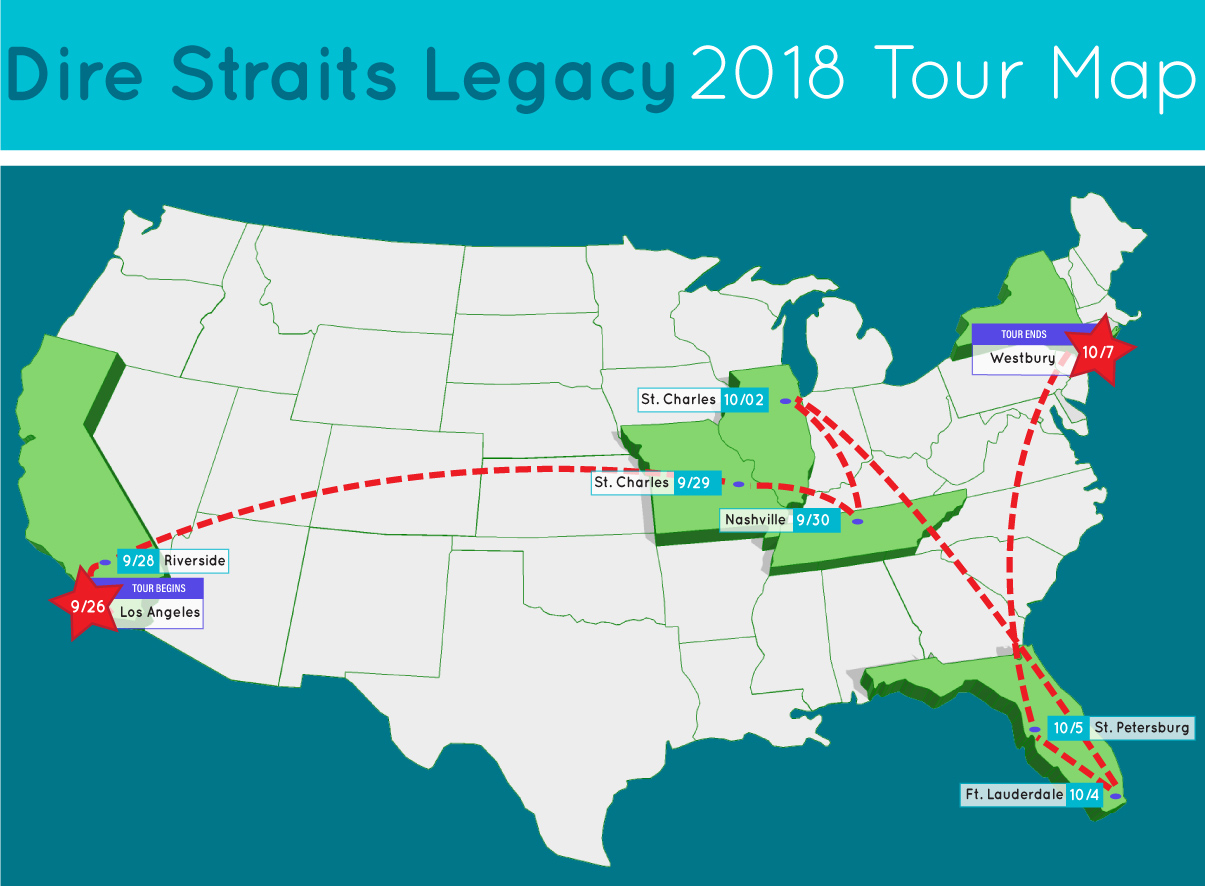 Where is Dire Straits Legacy playing near me?