Journey and Def Leppard, two of the best-selling rock bands of all time are coming together in 2018 for a co-headlining tour across North America. This marks the second time the bands have united - they co-headlined a tour in 2006. Half of the 58 shows on 2018 tour will be closed by Journey and half by Def Leppard.

As a testament to their popularity among rock fans, these two legendary bands have combined to sell over 200 million records worldwide, a staggering amount.

The tour kicks off at Hartford’s XL Center on May 21 and wraps at “The Fabulous Forum” in Los Angeles on Oct 6. The tour will include concerts at stadiums and world-famous arenas like New York’s Madison Square Garden (a place Def Leppard has yet to play a full concert).

Of the tour, Journey’s legendary guitarist and frontman Neal Schon said, "These co-headlining Journey/Def Leppard dates will be epic classic rock shows. So many hits. It will be great to see you all, friends!"

Said Joe Elliott of Def Leppard, "This tour is going to be a blast! We've toured together before and it was massive. This time it's going to be even bigger and better!"

Def Leppard is celebrating the release of their entire catalog for streaming and downloading. This marks the end of the digital distribution holdout for one of the last multi-platinum selling bands. Their entire catalog has been made available on online music services like Apple Music and Spotify.

On the band’s website, Joe Elliott said about the news, “It is with a mixture of relief & euphoria that we now see our entire catalog finally getting a digital release. Having embraced every other format with open arms, especially & more recently the reemergence of vinyl, we’re now going to be available to everyone everywhere and honestly, it’s as exciting as the original releases were.”

A Hall of Fame Band

Journey, embarking on their first big tour since celebrating their 2017 induction into the Rock and Roll Hall of Fame, has defined the big rock and roll sound of the late 70s and 80s.

Journey has sold 48 million albums in the U.S, according to the Recording Industry Association of America (RIAA) - the 25th best-selling band. Their worldwide sales have reached over 100 million records, only five other bands have reached that milestone. 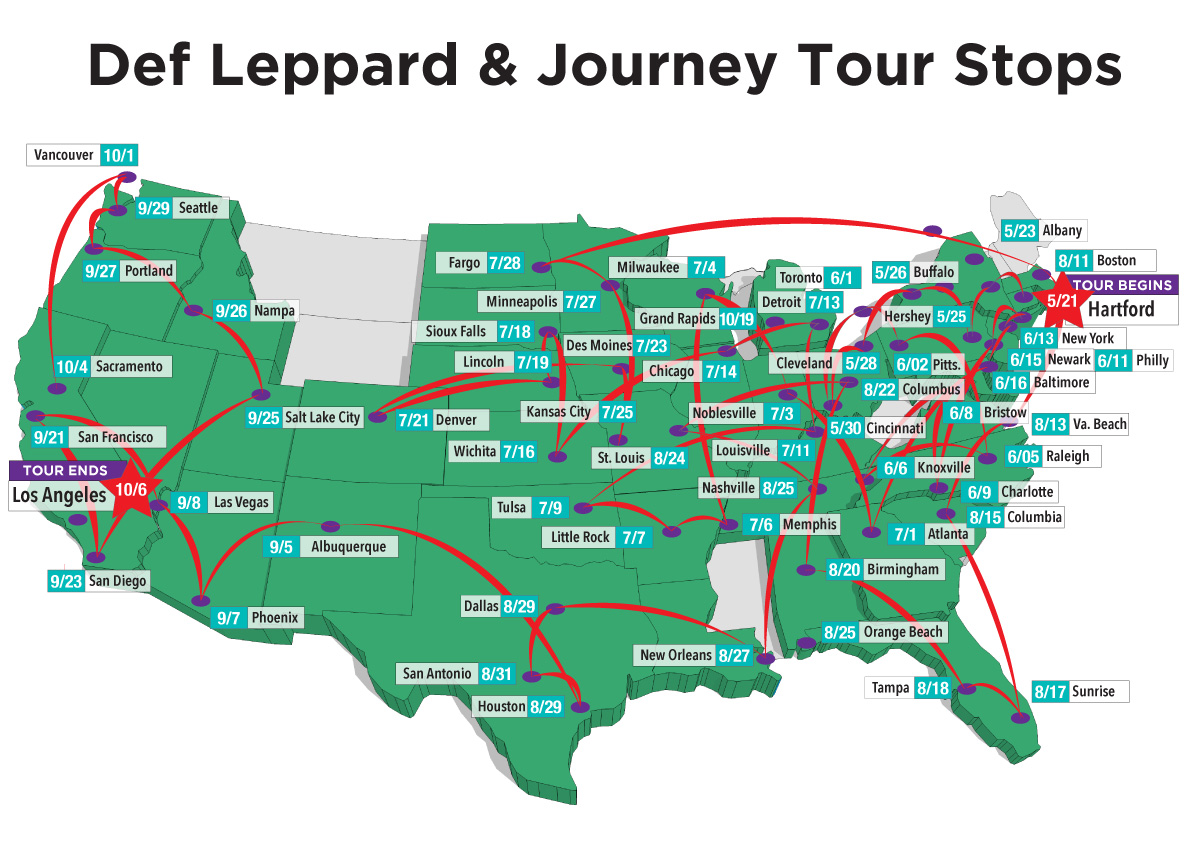 Where are Def Leppard and Journey playing near me?