Cheer Up! David Byrne is Touring in 2018

David Byrne, former Talking Heads frontman, has announced a 2018 concert tour, his first since 2009.  The upcoming shows are rumored to feature Talking Heads hits, as well as music from his forthcoming album, American Utopia, due out Mar 9.

Byrne has been lecturing on the power of positivity and launched a multimedia project, “Reasons To Be Cheerful,” where he will be sharing positive, community-based stories designed to offset the overly negative times we live in.

On the website, Byrne says, “Hey, there’s actually some positive stuff going on.”

Bryne – an Oscar, Grammy and Golden Globe winner and inductee into the Rock and Roll Hall of Fame is embarking on a tour with a stage design that can be described as a groundbreaking. Byrne wants everyone on stage to be mobile, with no risers or drum platform - a completely clear stage. He is planning on using lightweight chains to hide non-performers and gear.

"American Utopia," Byrne teases, "...is about a fairly large group of us on stage,  It’s not about screens, it’s not explosions, it’s about us and you guys.”

The first leg of the tour will feature six shows on the East Coast, starting March 3rd at the Count Basie Theatre in Red Bank, New Jersey and wrapping March 10th at the Ulster Performing Arts Center in Kingston, New York.

After the first leg, Byrne will play several festivals in South America and Europe.

The second leg kicks off at Coachella, in Indio California on Apr 13 and Apr 20 with a stop in Tucson in between. His remaining stops include Oklahoma City, Nashville, Asheville, Charlotte, Durham, Pittsburgh, Detroit, Cincinnati, and others before concluding in Oakland, CA on Aug 16 at the Fox Theatre. 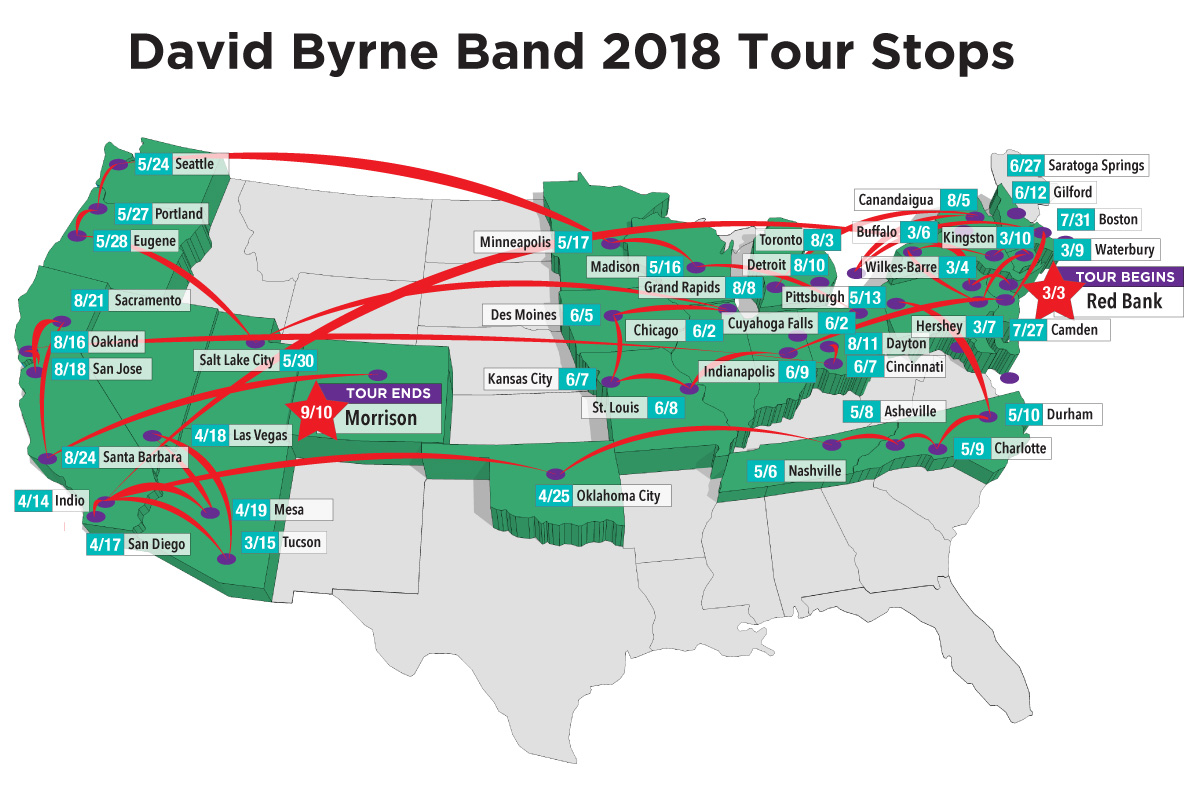 Where is David Byrne playing near me?