Comedy legends and longtime friends Jon Stewart and Dave Chappelle are joining forces for double the laughter in their series of co-headlining shows! The comedic duo is planning to perform for seven dates in three cities this summer 2018.

In July 2017, Stewart announced the anticipated release of a pair of HBO stand-up specials, which mark his first in 21 years since 1996’s Jon Stewart: Unleavened, also on HBO. He departed The Daily Show in 2015 after hosting it for 16 years.

In the past year, Chappelle has released four Netflix specials: Equanimity, The Bird Revelation, and the Grammy-winning The Age of Spin and Deep in the Heart of Texas. His run on Chappelle’s Show ended in 2006 after just three seasons when he abruptly left and cut the third season short.

Don’t miss out on the shenanigans and hilariousness that will ensue when these two take the stage!

Who Is Dave Chappelle?

David Khari Webber Chappelle was born in Washington, D.C. as the youngest of three children, and grew up in Silver Spring, Maryland. Growing up, Chappelle’s comic inspiration came from Eddie Murphy and Richard Pryor. In 1991, he graduated from Washington's Duke Ellington School of the Arts, where he studied theatre arts. Shortly after he moved to New York City to pursue his comedy career.

He performed at Harlem's famed Apollo Theater in front of the infamous "Amateur Night" audience, but he was booed off stage. Chappelle described the experience as the moment that gave him the courage to continue his show business aspirations. He quickly made a name for himself on the New York comedy circuit, even performing in the city's parks.

He began his acting career in 1993, landing supporting roles in several box office hits like The Nutty Professor, Con Air, You've Got Mail, Blue Streak, and Undercover Brother. His first lead role was in the 1998 comedy film Half Baked.

In 2003, Chappelle became more widely known for his sketch comedy T.V. series Chappelle’s Show, which earned high ratings. It ran for only two years but is still played on late night television networks around the world today. Upon leaving the show, Chappelle began performing stand-up comedy across the U.S.

By 2006, Chappelle was the "comic genius of America,” according to Esquire. In 2017, Rolling Stone ranked him number nine in their "50 Best Stand Up Comics of All Time." Chappelle earned an Emmy Award for his guest appearance on Saturday Night Live in 2017 and a Grammy Award for his Netflix special The Age of Spin & Deep in the Heart of Texas.

Who Is Jon Stewart?

Jonathan Stuart Leibowitz was born in New York City to a family of Jewish immigrants who went to America from Poland, Ukraine and Belarus. He is the second of four sons. Stewart's parents divorced when he was eleven years old, and Stewart was largely estranged from his father. Because this strained relationship, he dropped his surname and began using his middle name, Stuart. This is contrary to the popular belief that he dropped his last name because of the ethnic identity associated with it.

Stewart graduated in 1984 from the College of William & Mary in Virginia, where he played on the soccer team and initially majored in chemistry before switching to psychology. He had a reputation for being the funny guy at school, so he decided to return to New York City in 1986 to try his hand at the comedy club circuit. He didn’t muster up the courage top get on stage until the next year.

He made his stand-up debut at The Bitter End, where his comedic idol, Woody Allen, also began. He became a regular at The Comedy Cellar, a comedy club in Manhattan where many top New York comedians perform. Stewart’s career took off in 1993 when he made an appearance on NBC's Late Night with David Letterman. He was considered a finalist to take over Letterman's position upon his departure from the program, but it was instead given to the relatively unknown Conan O'Brien.

Later in 1993, Stewart developed The Jon Stewart Show, a talk show on MTV. The Jon Stewart Show was the first talk show on the network. It was an instant hit, becoming second-highest rated MTV show. He became the host of The Daily Show in 1999, and during his tenure the show gained popularity and critical acclaim, winning 22 Primetime Emmy Awards.

Stewart is known for his political satire and outspoken, humorous critique of personality media shows, such as CNN, FOX News, and MSNBC. Aside from his comedy career, Stewart has hosted the 78th and 80th Academy Awards and has written two highly successful books. 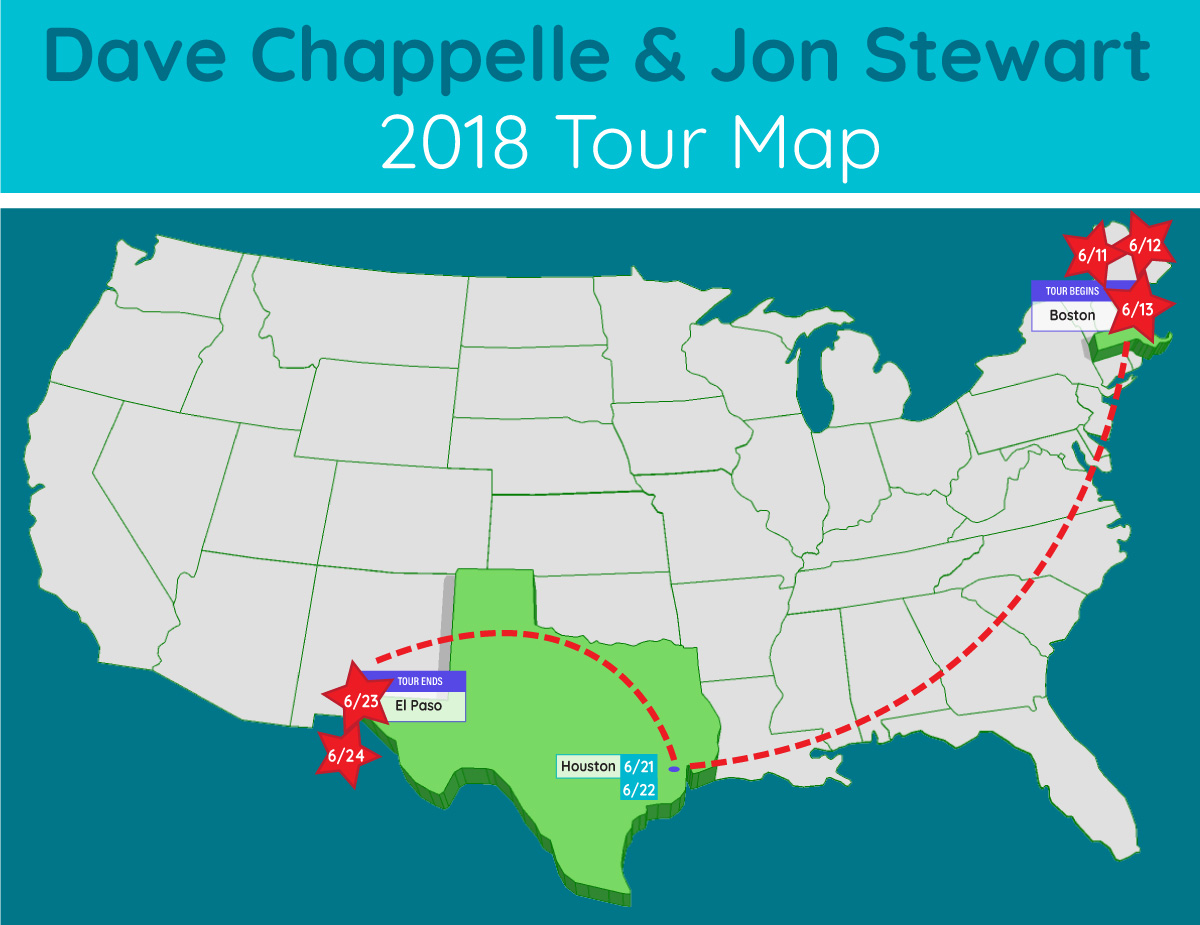 Where are Dave Chappelle and Jon Stewart performing near me?