This summer get ready for another package tour brought to you by four of the biggest names in 90s rock ‘n roll. Buckcherry, P.O.D., Lit, and Alien Ant Farm are joining forces for a 33-date trek across the country they’re calling the Gen-X Tour.

The journey will begin with performances at Summerfest on June 28 and will see the band hit several cities that extend dates into early fall. Other stops include Savannah, Dallas, and St. Louis before the tour wraps with two shows in Scottsdale, Arizona on September 6 and 7.

"You’re gonna get your money's worth on this one, the Gen X Summer tour is gonna be one to remember for sure,” Buckcherry frontman Josh Todd said of the tour. “I love these bands. We all came out around the same time exploding onto the scene with great summertime hits and an awesome live show...let's get wild and loose!"

Sonny Sandoval from P.O.D. chimed in: "This is the good vibes, rock and roll tour of the summer. A bunch of friends hitting the road together and playing music we love for more friends across the states.”

Lit bassist Kevin Baldes added: “We’re super excited to tour with our long time friends and colleagues of 20+ years this summer. It’s going to be a real hoot, to say the least!”

Alien Ant Farm guitarist Terry Corso concluded: “The Gen X Tour is gonna be one for the books! All Cali bands, all old buddies from the office, who could ask for more right? Except maybe a few thousand American rock and roll fans cruising out to the show to party and receive what we deliver.”

Buckcherry formed in 1995 in Anaheim, California and released two albums, a self-titled debut and Time Bomb before splitting in 2002. In 2005, lead singer Josh Todd and guitarist Keith Nelson regrouped with a new lineup and released an album in 2006, titled 15. It contained Buckcherry's biggest hits to date, "Crazy Bitch" and "Sorry" which was their first Billboard Hot 100 top ten hit. Their fourth album, Black Butterfly, was released in 2008, and their fifth album, All Night Long, was released in 2010. Buckcherry released their sixth album, Confessions, in 2013.

Payable on Death, better known as P.O.D. formed in 1992 a Christian nu metal band from San Diego that consists of vocalist Sonny Sandoval, drummer and rhythm guitarist Wuv Bernardo, lead guitarist Marcos Curiel, and bassist Traa Daniels. They achieved mainstream success with their third studio album, The Fundamental Elements of Southtown. Over the course of their lengthy career, they have received three Grammy Award nominations and sold over 12 million records worldwide.

American rock band lit formed in 1988 in Fullerton, California who shot to stardom with their second album titled A Place in the Sun, which would become their best-selling album and yielded their biggest hit to date, “My Own Worst Enemy.” The song earned the Billboard Music Award for the biggest modern rock song of 1999. Other singles included “Zip-Lock” and “Miserable,” which was among the top ten most played songs of 2000. They have continued to produce music, releasing their most recent sixth studio album, These Are the Days in 2017.

Who is Alien Ant Farm?

Alien Ant Farm formed in 1996 in Riverside, California. They have released five studio albums, selling over 5 million units worldwide. Their most notable hit is their cover of Michael Jackson’s “Smooth Criminal” which was feature on their debut album titled Greatest Hits. It went on to win Best Independent Album in the L.A. Music Awards. The band has released four more albums since, with their most recent being Always and Forever in 2015. 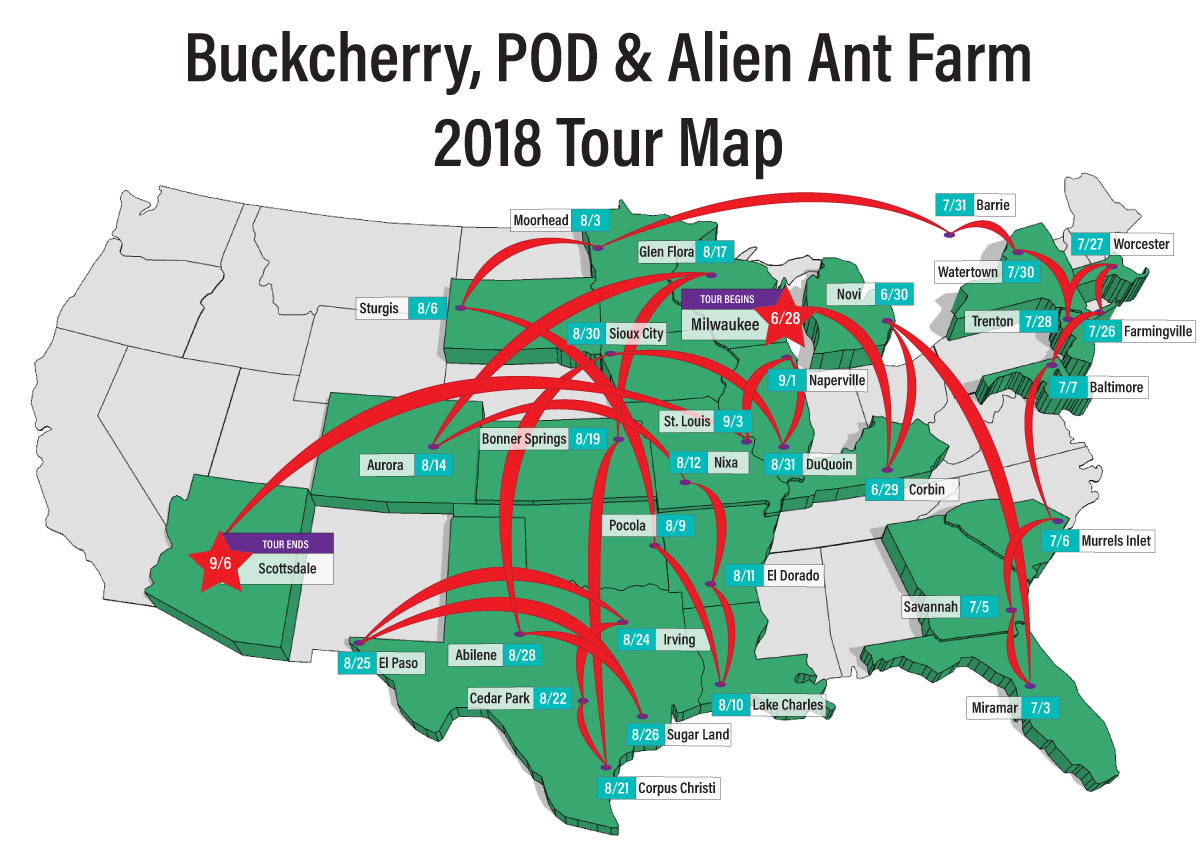 Where are Buckcherry, P.O.D., Lit, and Alien Ant Farm playing near me?