Boy George and Culture Club are taking fans back to the 80s this summer! Alongside The B-52s and Tom Bailey of the Thompson Twins, the dance and new wave legends announced they will be embarking on a lengthy U.S. tour that encompasses over 40 dates, giving fans ample opportunity to witness their talents live.

The three-month-long tour will open on June 29 in Saint Augustine, FL, hitting several stops such as Boston, Houston, and Portland and San Diego before coming to conclusion in Fresno, CA on Oct 5.

Boy George, known for iconic 80s hits like “Boy Down Mister” and “Generations of Love,” has been leading Culture Club on-and-off since he first left the group in 1984. In honor of their summer tour, the singer-songwriter will once again be the lead vocalist of the English band.

In a statement, George mentioned he was working on new music with Culture Club to be previewed on the upcoming tour alongside classics like “Do You Really Want to Hurt Me” and “Karma Chameleon.”

"I just want to release the album so it will get heard," George said in an interview with Billboard. "It would be smarter for us to put the record out when I have a social presence rather than relying on a little bit of nostalgia and the goodwill of the press and sporadic radio play."

Even today, this tag-team of classic 80s artists have proven they can still bring all the charisma and energy of the era to their latest shows.

Who are Boy George and Culture Club?

Upon leaving the successful English band Culture Club in 1984, Boy George led them intermittently before returning over a decade later for a reunion tour and the release of their album, Don't Mind If I Do in 1999. George again went on hiatus from Culture Club, only to get back together to tour in 2014. They began to work on a new album titled Tribes in 2015 which they plan to reveal this year.

The B-52s formed in 1976, their debut single “Rock Lobster” instantly becoming a hit and putting them on the map. Other notable hits include “Love Shack” and “Roam.” Their last album, Funplex, was released in 2008, although the group has continued to remain active with tours and performances since then.

Who is Tom Bailey of the Thompson Twins?

Tom Bailey rose to prominence in the early 1980s as lead singer of the Thompson Twins, known for top ten hits like “We Are Detective” and “Doctor! Doctor!” among others. After the release of the band’s final album in 1991, Bailey experimented with various musical gigs before releasing his first solo single titled “Come So Far” in 2016. Bailey recently announced he is recording his debut solo album, set to be released this year. 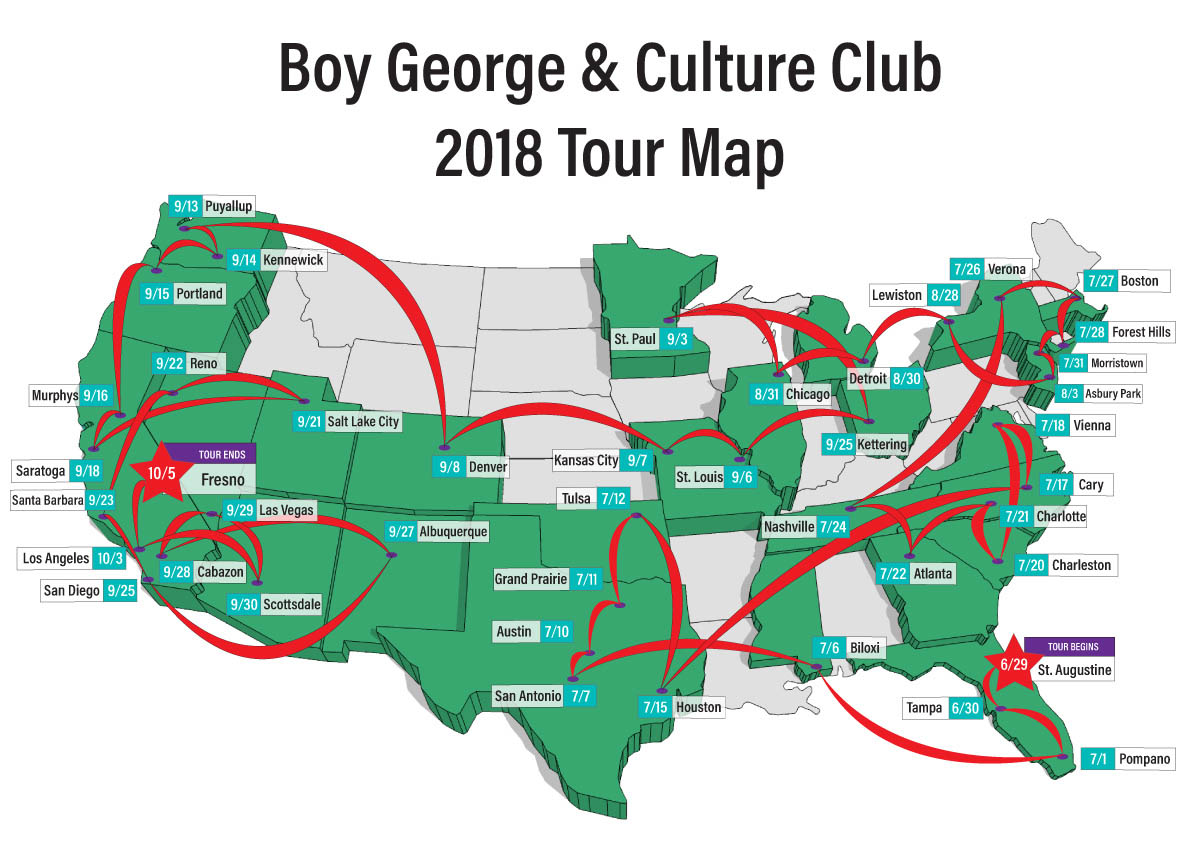 Where are Boy George, The B-52s, and Tom Bailey playing near me?