Bob Seger Hops Back on the Runaway Train with Rescheduled Tour

If you’re a fan of legendary singer-songwriter Bob Seger, you’re probably aware that his 2017 "Runaway Train Tour" was derailed by an emergency spinal surgery that led to a year-long recovery. Now, the Rock and Roll Hall of Famer is healthy and ready to hop back on the "Runaway Train" with an announcement of rescheduled dates that will push from 2018 into the new year.

The 13 new dates will see Seger and the Silver Bullet Band resume the tour on November 24 in Kansas City. From there, they’ll hit several major cities like Chicago, Atlanta, Phoenix, and Denver before the train hits its final stop in Inglewood, California on February 23 of next year.

In a January interview, Seger expanded on his condition that led to immediate and necessary surgery. He had suffered a ruptured disc prior to the start of the 2017 tour and the symptoms spread to his legs.

"My doctor said to me, 'Oh no, that's it, you're done with this tour. You're having surgery now," Seger said. "I'm feeling better all the time. They aren't letting me lift anything over five pounds. I can't do anything: no piano, no guitar, no nothing. But as soon as the pain stops, I'll be playing again."

According to reports, it’s very likely that Seger will tack more dates onto the tour, so stay updated on Event Ticket Center’s site!

Who Is Bob Seger?

Robert Clark Seger was born in Detroit, where he kickstarted a successful musical career. Growing up, Seger would stay up late listening to a faraway radio station and was influenced by musicians he heard like James Brown (who he liked more than The Beatles), Garnett Mimms, Little Richard, Wilson Pickett, Otis Redding and others.

In 11th grade, Seger arrived on the Detroit music scene in 1961 fronting a three-piece band called the Decibels. The band featured members from his high school and included Seger on guitar, piano, keyboards, and vocals. The Decibels recorded an acetate demo of a song called "The Lonely One" at Del Shannon's studio in 1961. As well as being Seger's first original song, "The Lonely One" was Seger's first song to be played on the radio, airing only once on an Ann Arbor radio station.

Seger continued his local success performing and recording as Bob Seger and the Last Heard, and Bob Seger System throughout the 1960s. In 1973, he put together the Silver Bullet Band with a group of Detroit-area musicians. It was with this lineup that Seger saw the most success, catapulting to national fame with the albums Live Bullet and Night Moves in 1976.

On his studio albums, Seger also worked extensively with the Alabama-based Muscle Shoals Rhythm Section, also known as the Swampers, which appeared on several of Seger's best-selling singles and albums. Seger co-wrote the Eagles' number one hit song "Heartache Tonight" from their 1979 album The Long Run, a collaboration that was a result of Seger's and Glenn Frey's early days together in Detroit.

In 1980, Seger released Against the Wind and it became his first and only number one album on the Billboard album chart. The first single "Fire Lake” peaked at number six and featured The Eagles' Don Henley, Timothy B. Schmit, and Glenn Frey on backing vocals, and Muscle Shoals guitarist Pete Carr on acoustics. Against the Wind won two Grammy Awards.

The live 1981 album Nine Tonight featured Seger's rendition on Eugene Williams' "Tryin' to Live My Life Without You,” which became a top five hit. Seger released the acclaimed The Distance in 1982, which spawned numerous hit singles. The cover of Rodney Crowell's "Shame on the Moon” was the biggest hit of the Silver Bullet Band's entire career, hitting number one on the Adult Contemporary chart.

Seger’s next hit studio album, Like a Rock, emerged in 1986. The song "American Storm" was another Top 20 that would later become familiar to many Americans through its association with a long-running Chevrolet ad campaign (something Seger explicitly chose to do to support struggling American automobile workers in Detroit).

Seger’s extensive six-decade career has seen the talented rock artist sell over more than 100 million records worldwide. He was also inducted into the Rock and Roll Hall of Fame in 2004 and the Songwriters Hall of Fame in 2012. Seger and the Silver Bullet Band also have a star on the Hollywood Walk of Fame. 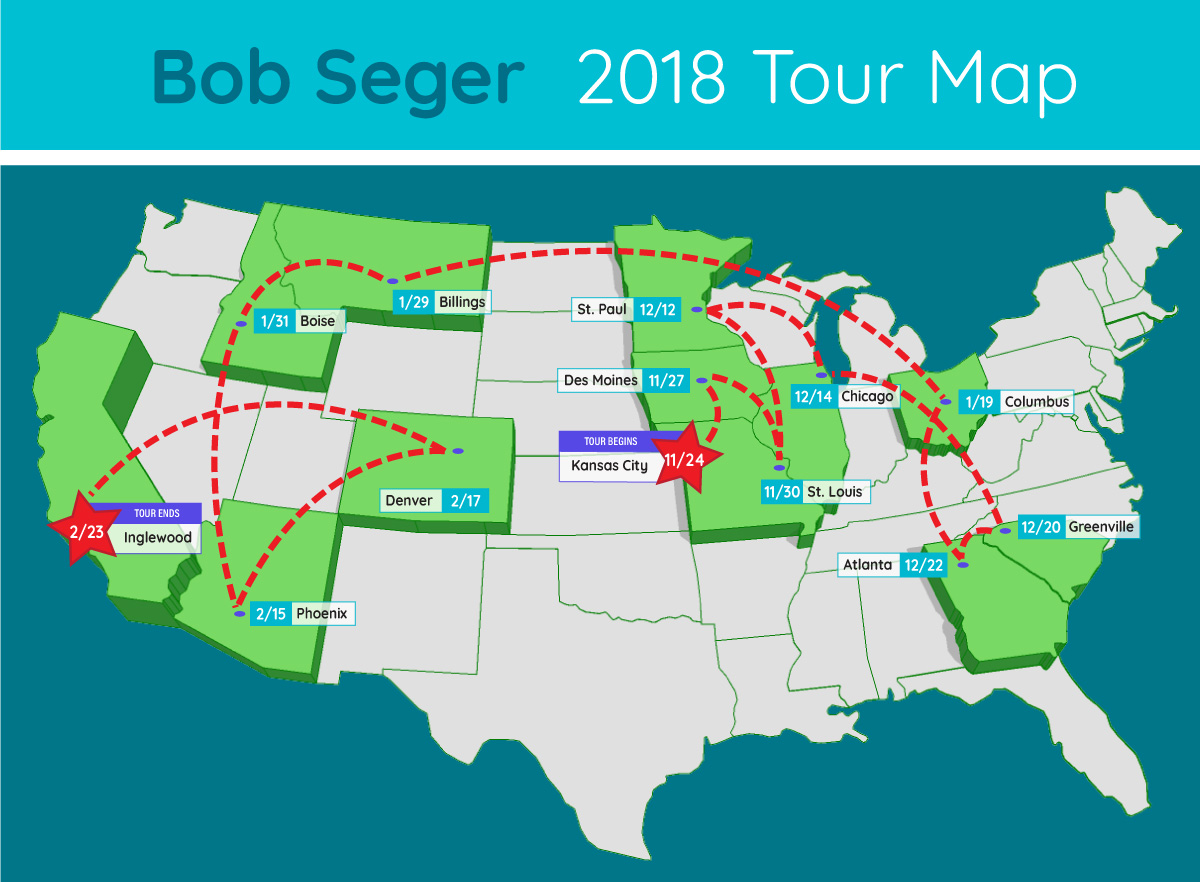 Where is Bob Seger playing near me?