Country superstar Blake Shelton will mix old country with new on his all-new headlining tour, set to kick off early next year!

The “Friends and Heroes Tour” gets underway February 14 with a show in Shelton’s home state at the Chesapeake Energy Arena in Oklahoma City, OK. From there, he will go on to hit a slew of cities across the US including Kansas City, Pittsburgh, Tampa and Green Bay. A final performance on March 23 will wrap up the 18-date trek in Albany, NY.

The “I’ll Name the Dogs” crooner has enlisted the help of country music vets John Anderson, the Bellamy Brothers, and Trace Adkins along with rising country star Lauren Alaina to join him as supporting acts for the upcoming run of shows.

True to form, Shelton shared the big news in a sarcastically funny video. Sitting at a bar, he starts complaining to the bartender (Alaina) that he needs to put a tour together but can’t decide “who in the hell” to take out with him. After schooling twenty-something country fans on the merits of Anderson and the Bellamys and musing over his love for Adkins, Alaina sagely tells Shelton that is seems he’s had the answers all along.

"If you ask me it sounds like you know exactly who you want to take on tour,” she says in the video. “Why don't you take your heroes and friends? And while you're at it, why don't you take me too?"

Looks like Shelton took his bartender’s advice, and we couldn’t be more excited that he did.

Who Is Blake Shelton?

Blake Shelton started singing and playing guitar from the time he was a young child. The aspiring star wasted no time chasing his dreams, relocating from Oklahoma to Nashville just two weeks after his high school graduation, and skyrocketing to stardom with the release of his self-titled debut album in 2001. Anchored by the success of his single “Austin,” which spent five weeks at the number one spot on the Billboard Hot Country Songs chart, the album went on to earn a platinum certification and produced two more Top 20 singles.

With his sly sense of humor and warm, masculine ease, Shelton steadily continued to win the hearts of fans across the nation, helping him crossover from country into the mainstream. He has released a total of eleven studio albums since his breakthrough debut, charting well over 30 singles with 24 of them hitting the number one spot and 17 of them doing so consecutively. His 11th number one, “Doin’ What She Likes” broke the record for most consecutive number one singles in Country Airplay Chart history. In 2011, his single “Honey Bee” went triple platinum around the same time Shelton signed on as a judge and vocal coach for NBC’s singing competition series The Voice, expanding his audience and assisting in his crossover to becoming a household name.

Throughout his 17 years in the spotlight, Shelton has taken home several prestigious awards for his contributions to country music, including eight Grammys, nine CMAs, eight ACMs, seven CMTs and one CMT Artist of the Year (to name only a few). He was inducted to the Oklahoma Hall of Fame in 2014 and made an official member of the Grand Ole Opry in 2010. In November 2017, Shelton made People magazine history as the first country artist ever to grace the magazine’s cover as “Sexiest Man Alive,” and only the second musician to do so apart from fellow The Voice coach Adam Levine. Shelton is considered one of the biggest country artists of the 21st century, influencing several rising musicians as well as established artists like Sheryl Crow, who credits him for inspiring her musically. 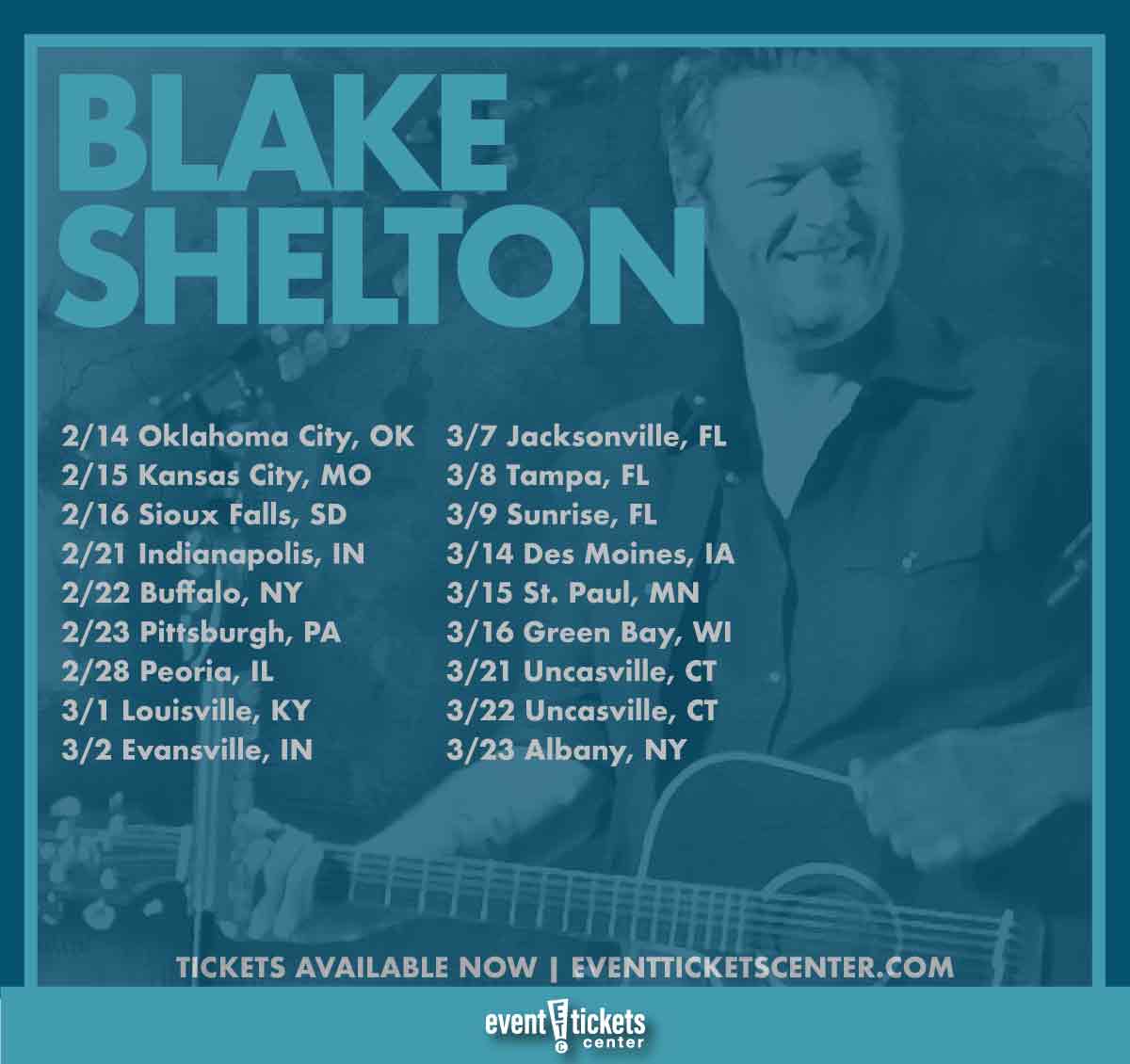 Where is Blake Shelton playing near me?