Bat Out of Hell Theatrical Tour Hitting the Road this Fall

Andrew Polec will star in Bat Out Of Hell - The Musical, coming to a stage near you this fall!

The critically-acclaimed new musical will kick of the U.S. leg of the tour with a stint at Detroit's Fox Theater from November 6-November 17. From there, the production will dazzle stages in cities like San Francisco, St. Louis, Boston and Washington, D.C., before wrapping with a final run in Dallas from June 26-July 7.

Andrew Polec, who thrilled audiences in London and Toronto, will reprise his role as Strat for the upcoming North American tour. He will be joined onstage by co-stars Emily Schultheis as Raven, Bradley Dean as Falco, Lulu Lloyd as Sloane, Avionce Hoyles as Tink, Harper Miles as Zahara, and Tyrick Jones as Jagwire.

"Just like the album Bat Out of Hell, this musical was born to tour," says Bat Out of Hell composer and lyricist Jim Steinman. "I'm thrilled that the show has been so well received in the U.K., but not everyone can get to London, so I'm delighted that the producers decided to take the show on the road here. Very rock and roll! Andrew Polec is a rock god in the making and to have him take his performance as Strat on the road is going to make this a legendary show for music fans."

What is Bat Out of Hell – The Musical?

Bat Out of Hell is a critically acclaimed musical based on the lyrics and music of American rock singer Meat Loaf’s ‘Bat Out Of Hell’ trilogy of albums. The show premiered in the UK in 2017, dazzling audiences and winning awards before going on to rock the stage in Canada. It is currently playing an extended engagement at London’s Dominion Theatre, where it opened to critical acclaim in April.

The stage musical incorporates iconic songs from the Bat Out of Hell albums including “You Took The Words Right Out of My Mouth,” “Bat Out of Hell,” “I would Do Anything For Love (But I Won’t Do That),” and “Two Out of Three Ain’t Bad.” The story tells the tale of The Lost, an eternally young street tribe, as they battle against a tyrant that is desperate to keep their city under his control. Follow the cast on a journey of self-discovery, romance and adventure in this one-of-a-kind musical set to the soundtrack of one of the greatest rock trilogies to ever be released.

"Bat Out Of Hell is one of the best albums ever recorded – period,” says the show’s producers. “To have the fans love the show so much is very rewarding. And people who never saw Meat Loaf are reacting passionately to the spectacle that Jay Scheib has put together on stage. To see people standing at both the intermission and at the end of the show. Wow! What more could we wish for?" 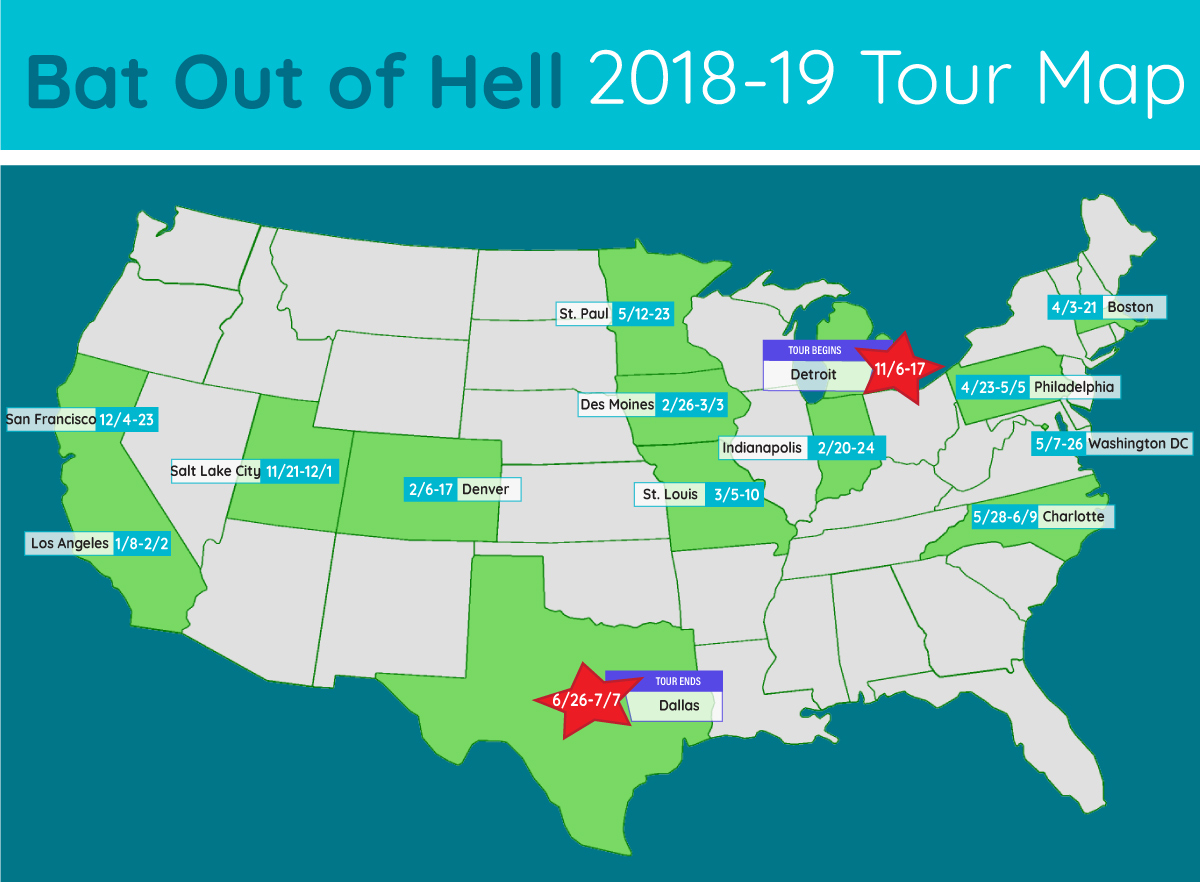 Where is Bat Out Of Hell - The Musical on stage near me?