You read that right: Arlo Guthrie has just announced plans to tour this fall, and his debut song and most popular classic will act as the endeavor’s centerpiece. The folk and blues rock legend behind the 18-minute Thanksgiving anthem is gearing up for a 24-date tour in honor of the song that made him a household name and even spawned a feature film.

The trek, dubbed “Arlo Guthrie Presents The Alice’s Restaurant — Back By Popular Demand Tour,” is set to kick off in Red Bank on October 4. From there, Guthrie will crisscross the East coast and Midwest, hitting stops like Berkeley, Ithaca and Plymouth. The tour will wrap up with a holiday special, Guthrie’s annual Thanksgiving concert in New York’s Carnegie Hall, on November 24.

Joining Guthrie on the road will be his son Abe and his daughter Sarah Lee, opening all shows. Longtime collaborators Terry “A La Berry” Hall, Steve Ide and Carol Ide who were in his former band Shenandoah are also slated to act as support.

“I didn’t think I was gonna live long enough to have to learn ‘Alice’s Restaurant’ again,” said Guthrie of his 1967 counter-culture classic which spawned a 1969 film. “It was a quirky kinda thing to begin with. Nobody writes an 18-minute monologue expecting fame and fortune.”

The tour is expected to coincide with the 50th anniversary of the film Alice’s Restaurant, which starred Guthrie as himself and was directed by the renowned Arthur Penn. Filmed in the Berkshires as a fictional adaptation, the film recreated some of the events of Guthrie’s signature monologue, “Alice’s Restaurant Massacree.” It earned Penn a Best Director Oscar Award nomination and was Guthrie’s first foray into acting. He would later take on several other roles in television series.

Guthrie just celebrated 50 years of performances in 2017, with this latest 2018 tour announcement indicating the icon has no intention of slowing down from doing what he does best.

Who Is Arlo Guthrie?

Arlo Guthrie is a folk singer-songwriter who was born into a musically-gifted household in New York. Carrying on the legacy of his father, the legendary folk singer Woody Gutrhie, Arlo is best known for singing songs of protest against social injustice using storytelling. A longtime political activist, Guthrie achieved fame with his best-known work and debut piece, "Alice’s Restaurant Massacree."

The song was inspired by a real-life incident where Guthrie and his friend Richard Robbins were slapped with a littering charge after one messy Thanksgiving. The song is also a commentary on the Vietnam War, as the U.S. Army refused to draft him because of his conviction for that crime. Guthrie has pointed out that this was also the exact length of one of the infamous gaps in Richard Nixon's Watergate tapes, and that Nixon owned a copy of the record.

In the fall of 1975 during a benefit concert in Massachusetts, Arlo Guthrie performed with his band Shenandoah in public for the first time. They continued to tour and record throughout the 1970s until the early 1990s. Although the band received good reviews, it never gained the popularity that Guthrie did while playing as a solo artist.

Guthrie's 1976 album Amigo received a 5-star (highest rating) from Rolling Stone and may be his best-received work, yet it lives in the shadow of "Alice’s Restaurant."

Though Guthrie is best known for being a musician, singer, and composer, throughout the years he has also appeared as an actor in films and on television, sometimes as himself. The film Alice's Restaurant (1969) is his best-known role, but he has had small parts in several films and even co-starred in a television drama, Byrds of Paradise.

Guthrie was awarded the Peace Abbey Courage of Conscience award in 1992 in honor of his activism efforts.

Alice’s Restaurant Massacree was released as the title track to Guthrie’s 1967 debut album of Alice’s Restaurant. In 2017, it was selected for preservation in the National Recording Registry by the Library of Congress as being "culturally, historically, or artistically significant."

Running 18 minutes and 34 seconds, this song is based on a true story that happened on Thanksgiving Day, 1965. Arlo was 18, and along with his friend Rick Robbins, drove to Stockbridge, Massachusetts to have Thanksgiving dinner with Alice and Ray Brock. Alice and Ray lived in a church - the former Trinity Church on Division Street in Stockbridge - and were used to inviting people into their home. Arlo and Rick were considered members of the family.

The next morning, Arlo and Rick swept up and loaded all the Thanksgiving garbage into a car. They went out to the dump, which was closed, and so they settled dumping the garbage on a side road in Stockbridge by the Indian Hill Music Camp which Arlo had attended one summer.

A little later, the phone rang, and it was the Stockbridge police chief who had found an envelope with the name Brock on it. The truth came out, and soon the boys found themselves in the chief’s police car. He took the kids to the police station after taking pictures of the litter. The kids pleaded guilty and were fined $25 each and ordered to go to court, where they were told to retrieve their disposed rubbish and spend the weekend picking up local trash. The same day they got convicted, Arlo went back to the church and started to write "Alice's Restaurant" with Alice.

"We were sitting around after dinner and wrote half the song," Alice recalls, "and the other half, the draft part, Arlo wrote." 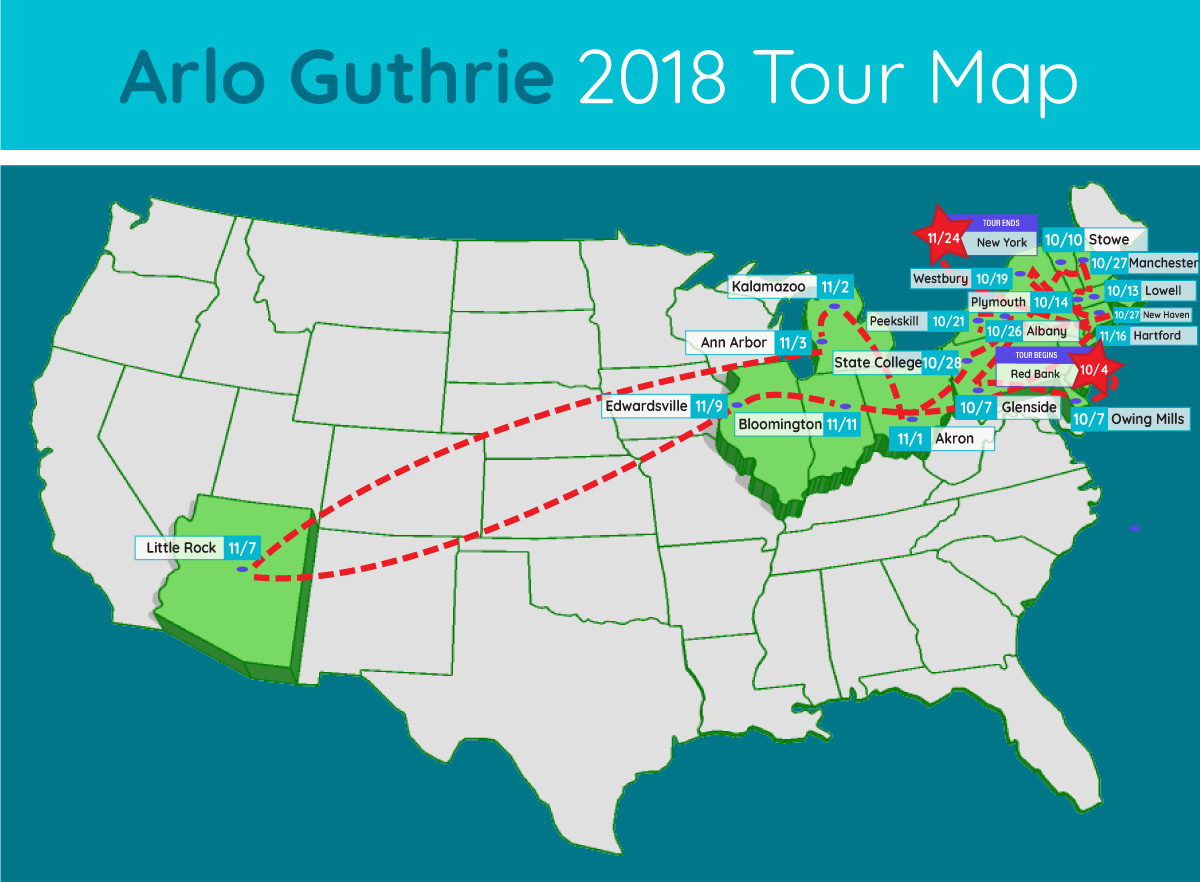 Where is Arlo Guthrie playing near me?