Award-winning rock band Foo Fighters are currently on tour in support of their most recent album, Concrete and Gold, which hit shelves in 2017. Now, the talented group has announced 31 new dates that will extend their tour into the fall months.

The new leg will take the band across arenas and stadiums throughout North America, starting July 6 in Columbia, Maryland at the Merriweather Post Pavilion. From there, the band will visit cities like Philadelphia, New York City, Boston, Chicago, Seattle, Denver, and Detroit. The tour will wrap on October 18 in St. Paul's Xcel Energy Center.

Supporting Foo Fighters on tour is an opener catalog consisting of The Struts, The Beaches, The Monsieurs, Dinosaur Jr., Speedy Ortiz, Melkbelly, Touched by Ghoul, The Joy Formidable and Gang of Youths. No more than two of these performers will be featured on the same night during the upcoming run.

The highly political and positively received Concrete and Gold is Foo Fighters’ ninth studio album, and has yielded hits like “Run” and “The Sky Is a Neighborhood.” It is their second to reach number one on the charts in the United States. Fans can expect to hear the album’s latest songs and old favorites, and if their current tour has told us anything, show attendees are also in for few surprises.

The Foo Fighters have welcomed fans onstage to jam with them, and even played a prank in Sweden where a stunt-double fell off the stage to reenact the fall that broke Dave Grohl’s leg three years ago, at that same venue.

Who Are the Foo Fighters?

Foo Fighters founder, lead vocalist, rhythm guitarist, and primary songwriter Dave Grohl began his music career at age 17, when he auditioned for legendary DC punk band Scream. Grohl played with Scream from 1986 until 1990, when he took took the position as the longest-serving drummer for popular grunge band Nirvana. Nirvana disbanded after Kurt Cobain’s death in 1994, and Grohl began recording 15 of the 40 songs he had written while touring with the band, playing every instrument and singing every vocal on the tracks. Grohl hoped to keep his anonymity and release the recordings under the title "Foo Fighters,” taken from the World War II term "foo fighter” in reference to unidentified flying objects. Grohl has had a fascination with UFOs since childhood.

He formed a band to support the self-titled Foo Fighters debut album in 1995, recruiting bassist Nate Mendel and drummer William Goldsmith, both formerly of Sunny Day Real Estate, as well as Nirvana touring guitarist Pat Smear. Goldsmith quit during the recording of the group's second album, The Colour and the Shape (1997), when most of the drum parts were re-recorded by Grohl himself. Smear's departure followed soon afterward, though he would rejoin them in 2006. They were replaced by Taylor Hawkins and Franz Stahl, respectively, although Stahl was fired before the recording of the group's third album, There Is Nothing Left to Lose (1999).

Keeping with his alien fascination, Grohl named his record company Roswell after the city in New Mexico where a supposed flying saucer crashed on a ranch in 1947.

They recorded some of Sonic Highways, their eighth studio album released in 2014, with legendary producer Steve Albini, who has also worked with the Pixies and Nirvana (In Utero). Specifically, the song "Something From Nothing" was recorded at Steve Albini's Electrical Audio studio in Chicago.

While on tour in Auckland, New Zealand, Foo Fighters encouraged an audience of 50,000 to dance so hard that it registered as seismic activity by the volcanic watchdog site GeoNet.

Foo Fighters have released a total of nine studio albums and have become known for big hits like “Everlong,” “The Pretender,” “Best of You,” “My Hero,” and “Learn to Fly.” They first received a Grammy Award for their music video for "Learn to Fly" in 2000 and have won a total of eleven. These include four Grammys in the Best Rock Album category for There Is Nothing Left to Lose, One by One, Echoes, Silence, Patience & Grace, and Wasting Light, and three awards for Best Hard Rock Performance for the songs "All My Life", "The Pretender", and "White Limo.”

Dave Grohl plays guitar like a drummer. "I was never taught how to play the guitar. I don't know what the chords to 'Everlong' are," he told Rolling Stone. "I only know what happens when I put the fingers there. But that riff is a good example of how I look at the guitar."

His greatest influence is John Bonham, and even has the Led Zepplin drummer's trademark three-circle logo tattooed on his wrist. 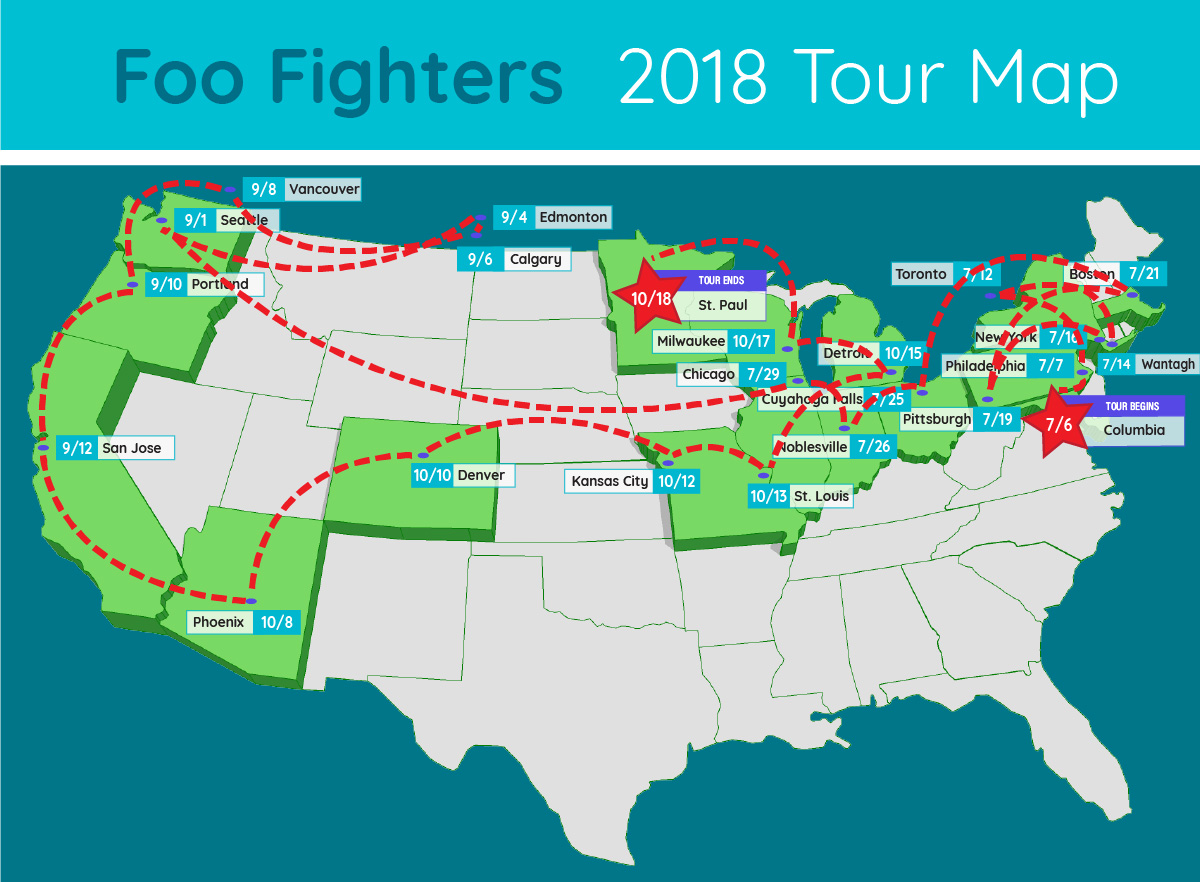 Where are Foo Fighters playing near me?