If you're looking for a sun-splashed journey to see your favorite teams prepare for the upcoming season, look no further. With 12 teams playing near the Florida coastlines and three in the center, there's plenty to soak in.

Check out our Grapefruit League map below to see where some of baseball's most exciting teams and their superstars are training.

The 2018 season celebrates 130 years of MLB Spring Training in Florida. In 1888 the original Washington Nationals featuring Hall of Famer Connie Mack, played the first exhibition game in Jacksonville, FL against the New York Giants. The Nationals ended up finishing with a 48-86 record and were convinced that traveling that far south wasn't worth it.

The Philadelphia Athletics returned to Florida 15 years later for the first full season by a big league club, this time with Connie Mack as Manager. Once again, it didn't work out as his team finished more than 14 games out of first place. He blamed Florida again, this time the misfortunes that resulted from his star pitcher wrestling a live alligator and attempting suicide after being jilted by a local woman.

The third time was the charm for Connie Mack because he returned to Florida in 1915 and the team proceeded to win 14 of their first 15 games and capturing the National League pennant.

Apparently, Florida wasn't the problem after all.

Why Is It called the Grapefruit League?

Legend has it that as a Dodgers publicity stunt in Daytona Beach, aviator Ruth Law thought it would be a good idea to throw a baseball out of her plane to the Dodger's Manager below. When she realized that it might kill him, she tossed a grapefruit instead and it exploded on his chest, making him believe he was dying.

This is reminiscent of a stunt by a Cleveland softball team owner tossing a ball out of the Terminal Tower to members of his team below only to smash a car and injure bystanders.

The Three Biggest Stories of This Year's Grapefruit League

The biggest splash of the offseason was the Yankees trading for the 2017 NL MVP, Giancarlo Stanton. A team that ranked first in home runs now has Stanton, who hit 59 home runs, the most in the majors. His new teammate, Aaron Judge, was the unanimous choice for 2017 AL rookie of the year, led the league with 52 home runs, the most by a rookie since 1987.

That's a total of 111 home runs between the sluggers. The San Francisco Giants only hit 128 dingers as a team. Baseballs will be flying out of Yankee Stadium this year.

Did the World Champs actually get better this offseason?

The 2017 World Champion Houston Astros are not happy at all by the pundits who are picking the New York Yankees to win the 2018 crown after offseason acquisitions, like Pirates' ace Gerrit Cole, and new relievers Joe Smith and Hector Rondon. Don't forget about former Cy Young and MVP winner Justin Verlander, who was acquired on Aug 31 last year. They get a full season of him in 2018. Verlander tells USA Today, "…starting right now, we're the team to beat.

"You're crazy if you think otherwise."

Can the Washington Nationals finally shake the injury bug and win the World Series?

Despite winning a division title for a second consecutive season, the Nationals' first-round exit in the playoffs in 2017 was enough to get manager Dusty Baker replaced by Dave Martinez.

If everyone stays healthy, this could be the year for Washington to win the World Series. The lineup is deep, and the pitching staff headlined by Max Scherzer and Stephen Strasburg is strong. Look for first-time manager Dave Martinez, who worked under Joe Maddon in Tampa Bay and Chicago, should breathe more life into a roster many believed was mishandled by Baker.

Adam Eaton and Trea Turner are back at the top of the lineup this year, making them one of the most dangerous teams in the league. Last season, in the 23 games with Eaton and Turner hitting ahead of him, Bryce Harper batted .405 with 25 RBIs. Following these three in the lineup will be Rendon, Murphy, and Zimmerman. Look for this lineup to make some serious noise in the National League.

*If they can stay healthy. 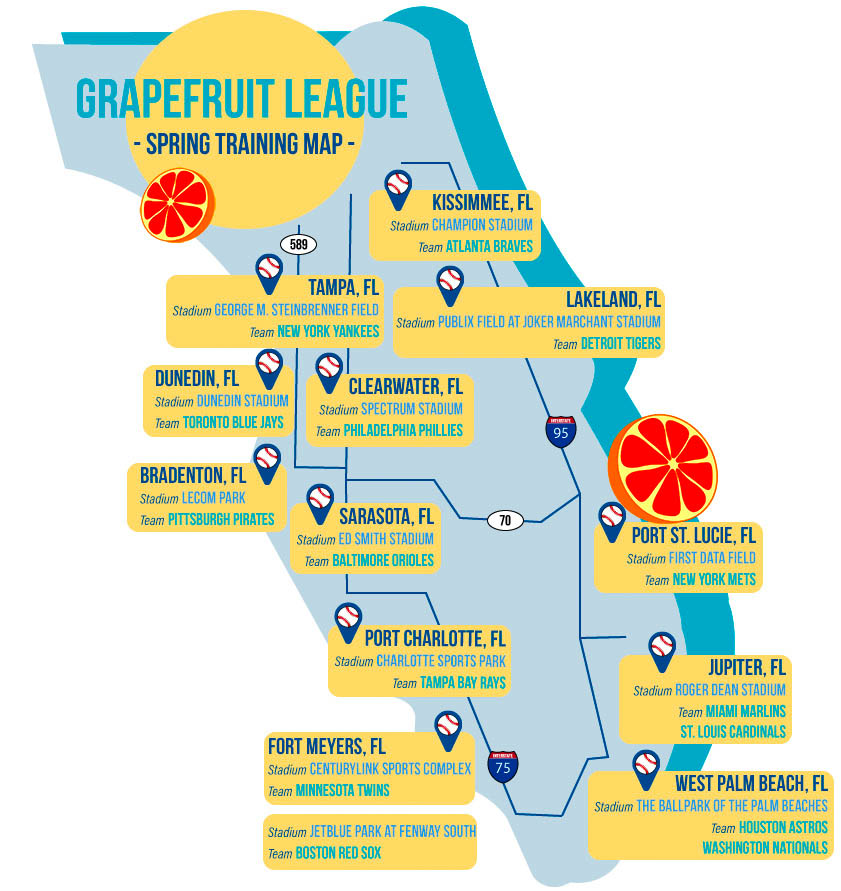 Below is a list of the Grapefruit League teams, their ballparks, and a link to buy tickets to see them play.